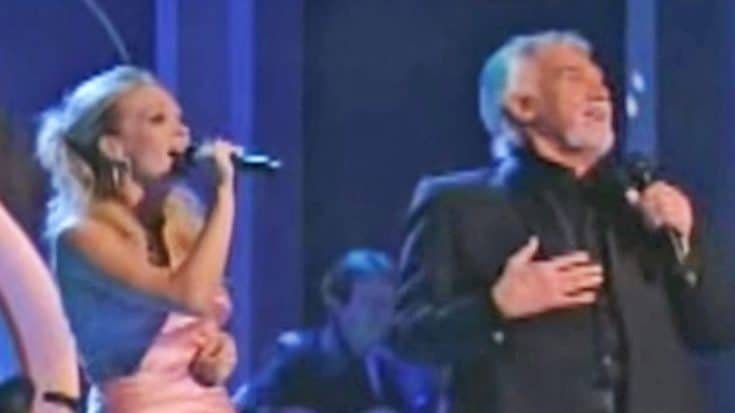 If things had gone according to plan, “Islands in the Stream” would have been an R&B song. It’s hard to imagine it now, especially since the tune became famous as a country pop hit.

When the Bee Gees wrote “Islands in the Stream,” they wrote it with R&B singer Marvin Gaye in mind. But instead of Gaye, it was country star Kenny Rogers who ended up cutting the song for his 1983 album Eyes that See in the Dark.

Rogers enlisted the help of Dolly Parton on the song, and the rest is history. “Islands in the Stream” hit number one on the country and pop charts, making it one of the biggest hits of both Rogers’ and Parton’s careers.

Today, the song is considered by many to be the greatest country duet of all time.

The Perfect Someone To Honor Dolly

So when Parton was one of the honorees during the 2006 Kennedy Center Honors, it only made sense for someone to honor her with “Islands in the Stream.”

That someone was Carrie Underwood, who had won American Idol a little over a year prior.

Underwood’s beautiful voice soared through the first part of the song, which was originally performed by Rogers. Parton was clearly impressed with what she heard, and could be seen smiling and clapping as Underwood sang.

But Parton’s happiness turned to sheer joy the second Underwood welcomed a special guest on stage. That guest was none other than Rogers himself!

Parton literally jumped out of her chair at the sight of her friend. He sang her portion of the song before he and Underwood started singing together. The two of them blew kisses to Parton once they were done singing, and Parton was clearly overwhelmed with happiness.

If you need something to brighten up your day, then this will do the trick. Go ahead and tune in below to check it out!