By Miranda Raye on August 6, 2018
Advertisement 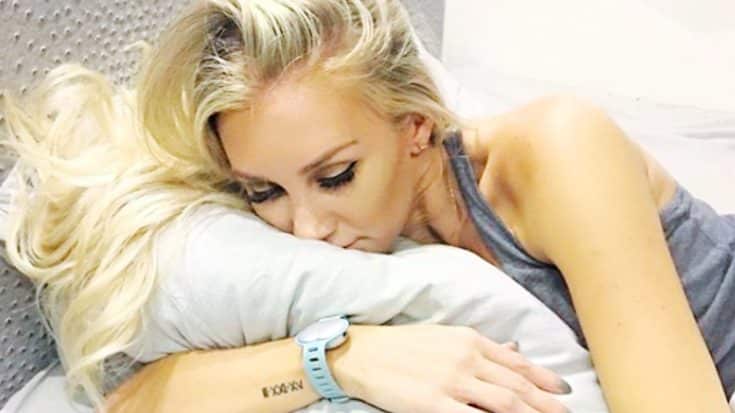 Brittany Aldean didn’t have the happiest of weekends.

Taking to Instagram on Monday morning (August 6), Brittany shared that on Saturday (August 4), “heaven gained two of the most amazing angels.”

One of those angels was her English bulldog, Bentley, or “Mr. B” as Brittany affectionately called him. Mr. B often appeared in photos that the 31-year-old shared on social media, and fans soon came to love him too.

Nothing’s cuter than a baby/bulldog conversation

In his old age, Bentley was forced to deal with his fair share of health issues. He spent 2017 undergoing chemotherapy for cancer, which Brittany was hopeful wouldn’t return.

However, after being her constant companion since she was 19, Brittany was forced to say goodbye to Mr. B.

“Where there were dog bowls and beds, now there are only memories of that sweet little ‘toof’ and loud snores,” Brittany wrote.

While Brittany and Jason still have two other dogs, we have a feeling that Mr. B’s absence will still take some time getting used to.

Mr. B’s death wasn’t the only sad event that Brittany had to deal with on Saturday. As she shared, that exact same day her 94-year-old grandmother passed away. Brittany described her beloved grandma as being “so feisty, sweet, and funny.”

While we don’t know for certain if this is the grandma that passed away, over the past week Brittany did just share a photo of herself and her son, Memphis, with her grandma in celebration of her 94th birthday. That leads us to believe that the grandma who passed away is likely the same one in this photo with Brittany.

Happy 94th Birthday to the sweetest Grandma a girl could ever have… can’t wait to surprise you today?✈️?

“Man oh man was she a favorite in our family,” wrote Brittany about her grandma. She went on to thank everyone for all of their kind words and support during this sad time, saying that their love “helps heal these broken hearts.”

You can read Brittany’s full post about Mr. B and her grandma’s deaths below.

This past Saturday, heaven gained two of the most amazing angels…My grandmother and my dog, Bentley (Mr B). This isn’t something I’d usually share on social media, but I know many of y’all have come to love Mr B. especially because he was such a major part of my life and in so many of my pictures. He truly was the best dog, my first born, my little chunky companion since I was 19 years old…there will never be another like him?? Where there were dog bowls and beds, now there are only memories of that sweet little ‘toof’ and loud snores? And as for my grandma, those who knew her all say the same thing… she was so feisty, sweet and funny, even at 94? Man oh man was she a favorite in our family. They are both missed oh so much?Thanks for the kind words and support… it helps heal these broken hearts. Xo

Our thoughts and prayers go out to Brittany and her family during this sad time.