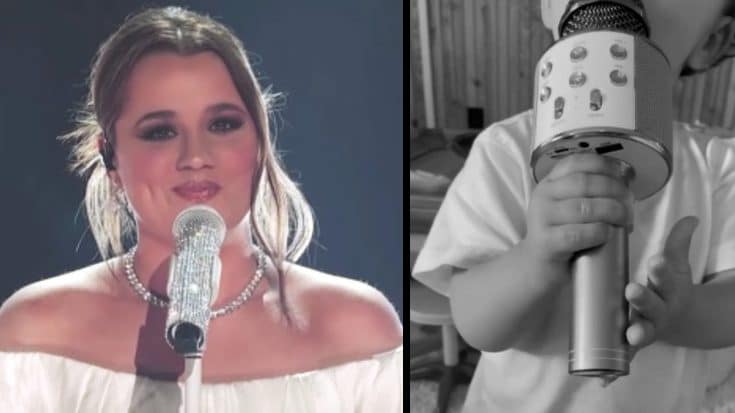 Gabby Barrett and her husband, Cade Foehner, met as contestants on American Idol in 2018. Gabby finished in third place that season, while Cade was eliminated in the Top 5.

After finishing Idol, Gabby’s debut single, “I Hope,” became a smash success. It has since been certified x6 Platinum by the RIAA.

Wherever Gabby goes, Cade is right by her side. He plays guitar in her band, and has also appeared in her music videos.

Most recently, Cade starred in Gabby’s official music video for “Pick Me Up.”

The couple married in 2019 and welcomed their first child, a daughter named Baylah May, in 2021. Now, they’re expecting their second child, a boy.

Gabby and Cade don’t share photos of Baylah that often. When they do post pictures of their daughter, they opt to cover her face. So when Gabby recently shared a video of her daughter, she positioned the camera in such a way that Baylah’s face wasn’t completely visible.

The video shows one-year-old Baylah sweetly singing her mama a little tune. “My girl. Singin to mama!” Gabby captioned the cute clip, which you can watch below.

Looks like Baylah may have inherited the musical gene from her parents!