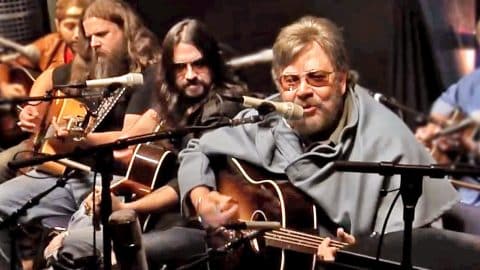 Like so many country artists, Hank Williams Jr. was heavily influenced by Waylon Jennings‘ music. They eventually collaborated on a duet titled “The Conversation,” which hit the 15th spot on the Hot Country Songs chart.

The two country outlaws developed a close bond, and were friends until Waylon passed away. Years later, SiriusXM decided to honor Waylon’s outstanding legacy by gathering up some talented artists for an all-star jam.

Those artists were none other than Jamey Johnson, Hank Jr., and Waylon’s youngest son, Shooter Jennings. Waylon’s widow, country singer Jessi Colter, was also on hand and provided accompaniment on the piano.

One of the songs Hank Jr. and his buddies covered that day was a track called “Waymore’s Blues.” Because it was only released as a B-side, the song wasn’t a big hit for Waylon. Still, it went on to become a fan-favorite with the passage of time.

Hank Jr. sang lead throughout, while Jamey joined in and provided backing vocals.

At one point mid-song, Hank Jr., Jamey, and Shooter all broke out into a thrilling acoustic guitar jam. They kept that energetic vibe going throughout the performance, which had Jessi dancing and clapping along from her seat.

When it comes to a showcase of raw talent, this is as good as it gets. Tune in below to watch Hank Jr. and his buddies honor the late, great Waylon Jennings with their acoustic rendition of “Waymore’s Blues.”