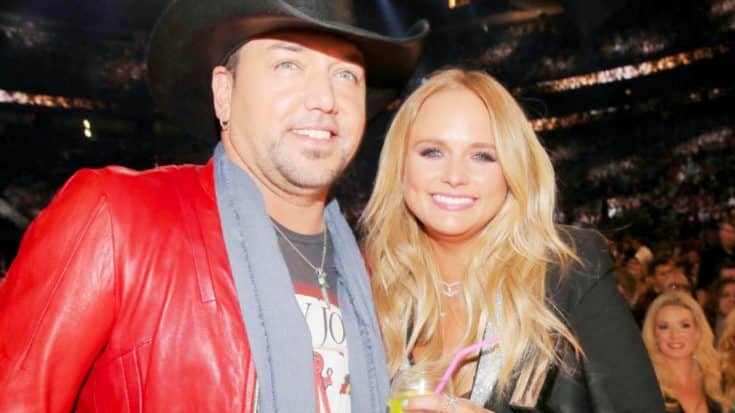 Prior to the release of his latest studio album, Rearview Town, in April, Jason Aldean started teasing some of its tracks.

He released its first single, “You Make It Easy,” in February, and it was a major hit.

Once Aldean unveiled the album’s tracklist, fans were anxious to hear one song in particular. That song was “Drowns the Whiskey.”

By now, we’re sure you’ve heard that song more times than you could even count. Following its release as a single in May, “Drowns the Whiskey” advanced up the Country Airplay chart to claim its top spot. To this day, it still remains one of country music’s hottest hits.

So why was there all the hype before the song debuted? Well, because fans saw that Aldean’s longtime friend Miranda Lambert would be featured on the track.

Why Jason Called On Miranda For Help

“Drowns the Whiskey” is not the first time the two country superstars have joined forces. They toured together quite frequently in the early years of their careers, and even recorded a previous song together.

In addition to being her friend, Aldean flat out appreciates what Lambert is able to offer as an artist.

“I dig Miranda,” he said during an interview with NPR. “I think she’s a great artist. I’ve always said if I was a female, I’d probably do the kind of stuff Miranda does, like ‘Kerosene.’“

So while he was working on recording Rearview Town, Aldean started sending Lambert songs that they could sing together. The first song he sent wasn’t a hit with her. But the second one was “Drowns the Whiskey,” and she loved it.

“When I sent her that one, she kind of flipped out,” he said during an interview with Taste of Country. “She was on board then. And then she came in to sing it and nailed it.”

They’re About To Mark A Huge First Moment

The artists both appear in the song’s hit music video, which was released in June. But even though the song has been out for months now, the two of them have never performed it together live.

Aldean did perform “Drowns the Whiskey” on live television during the CMT Music Awards in June, but Lambert did not attend. Instead, her parts were performed by background vocalists.

But after ages of waiting, fans of the duo are finally getting the number one thing they’ve been hoping for. On Thursday (November 1), the CMA announced an additional batch of performers at the 2018 CMA Awards, and Aldean and Lambert are on the bill.

Aldean later confirmed what everyone hoped, that he and Lambert will be singing “Drowns the Whiskey” together live for the first time.

Excited to perform “Drowns the Whiskey” for the first time live with my tag team partner @mirandalambert on the @cma awards this year. Tune in and check it out!

The night has the potential to be a huge one for the duo, and not just because of their performance. “Drowns the Whiskey” is nominated in three award categories, including Single of the Year, Song of the Year, and Musical Event of the Year.

Based on its success, we have a feeling it may win in one or more of those categories!

While you wait for the awards, enjoy the song’s popular music video below. Watching it, you can only imagine how good it will be to hear Aldean and Lambert sing “Drowns the Whiskey” live!