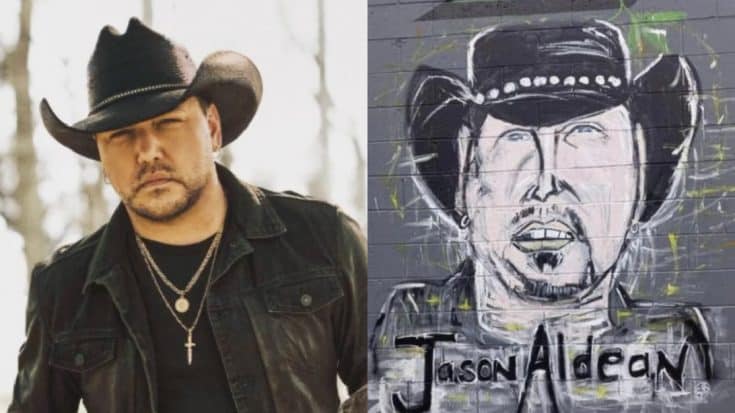 A new painting of country star Jason Aldean has popped up in his hometown of Macon, Georgia, and the singer has some thoughts about it.

Jason Aldean called into the Big D and Bubba Show on Thursday (July 21) to share his reaction to the mural. Aldean admitted to the radio show’s hosts that he had seen the mural and didn’t know who had commissioned it.

“I started seeing pictures of it popping up on Facebook. I think my dad sent it to me and he’s like, ‘This is cool. They just kind of did you dirty,” he laughed.

Aldean chose his words wisely as not to hurt the feelings of the artist and said, “I don’t wanna offend the artist, because like I said, I do appreciate the gesture, but I’m like, gosh man! Is that how people see me?”

Big D and Bubba joked that the portrait looked like a “parody photo” drawn at an amusement park or county fair.

“I can’t tell if you’re Beavis or Butt-Head,” the host joked.

“I saw a comparison today. They had the painting on the mural and then they had a picture of like, I think it was Beavis from Beavis and Butt-Head right beside it. It was pretty accurate,” Aldean laughed.

The portrait was painted on the side of a Dollar General store in a shopping center in Macon as part of “Macon Greatest,” a mural honoring some of the cities hometown celebrities including Otis Redding.

Hear Jason Aldean talk about the mural in the clip below.