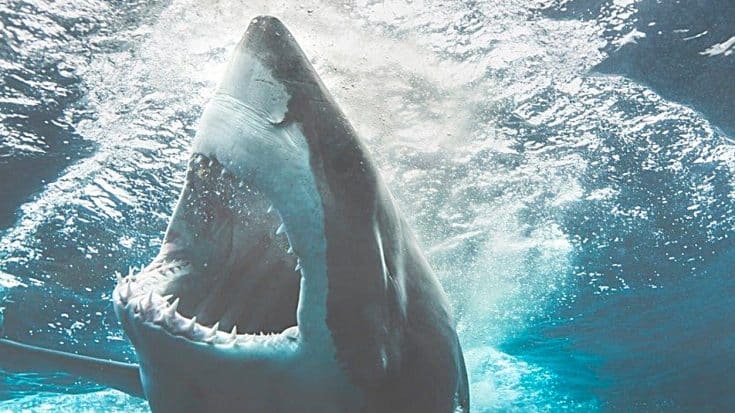 Good Morning Everyone! I thought I'd swim by to see how everyone's doing, before getting some fish for brunch. Sorry for being a stealthy shark and not pinging in for a bit,but don't worry! I'm fine,and I'll try to make an appearance soon. Hope you're having a fin-tastic weekend! pic.twitter.com/9GzP89lPlK

Luna is 15 feet long and has been tagged with a tracking device in her dorsal fin allowing researchers to locate her movements. She was pinged over the Charleston Bump, which is a “deepwater bottom feature 80 to 100 miles southeast of Charleston, South Carolina,” according to the National Oceanic and Atmospheric Administration (NOAA).

Pinging or a “ping” is when the shark swims up to the surface and its dorsal fin breaches the top of the water, touching the air. When this happens the tracker on the fin sends a signal to a satellite, notifying researchers who track the sharks. This gives them an idea of how sharks move and migrate through the ocean.

Two of the biggest sharks we are currently tracking, 15' @WhiteSharkLuna & 12' 9" @SharkCaroline, both pinged in today off the South Carolina coast. pic.twitter.com/Jn6gB9YtBl

Luna was given a tracking device by the ocean research group called OCEARCH who finds the sharks and tags them on a special made portable tagging dock. Then they are let go to swim on their own.

Two Of The Biggest Sharks

There was also another shark pinged off the coast of North Carolina and this shark is named Caroline. She’s a 12-foot 9-inch great white shark and with her being so close to Edisto Beach in South Carolina, there was warning sent out to notify the beaches.

Both sharks are big but Luna is recorded to be the second biggest shark ever tagged in the North Atlantic. You can actually view the map showing the paths these sharks swim. Every ping they transmit can be seen on Ocearch.org.

It’s quite fascinating to see the different paths the sharks take.