By Tiffany Smithson Aaron on May 10, 2018
Advertisement 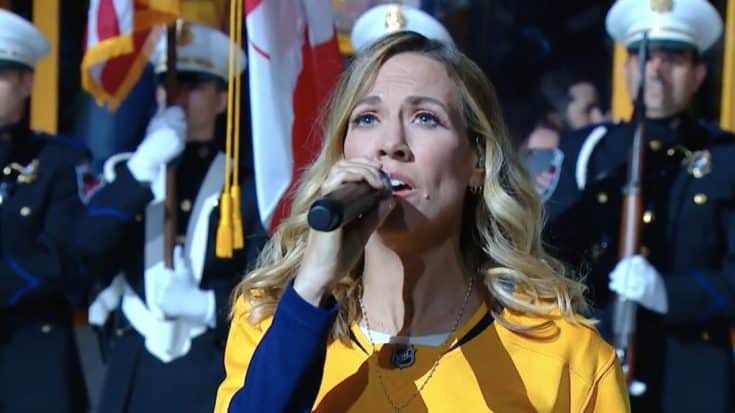 The Nashville Predators have something up their sleeve nearly every other hockey town doesn’t have….a community jam-packed with incredible talent from all musical genres.

Last year, when the team found themselves in the Stanley Cup playoffs for the first time, they started a tradition of sorts that has set them apart from other professional teams. They have drawn from their immense pool of local talent to perform the national anthem prior to the playoff games. During the 2017 season, Carrie Underwood, Luke Bryan, Little Big Town, Kelly Clarkson, Trisha Yearwood and Keith Urban were just a few of the big names who had the honor.

When the Preds made the playoffs again this season, fans became almost as excited about who was going to sing “The Star-Spangled Banner” as they were about seeing the game itself. Carrie Underwood, Lady Antebellum, Dierks Bentley, Jake Owen, Rascal Flatts, Maren Morris and Brad Paisley have all had their turn on the pre-game ice this season, so we anxiously anticipated who would have the pleasure of singing before Thursday night’s Game 7 of the second-round Stanley Cup playoff series between Nashville and Winnipeg at Bridgestone Arena.

We were not disappointed! Grammy Award-winning pop-turned-country artist Sheryl Crow delivered a flawless and simple rendition of our nation’s anthem. The crowd erupted as Crow was introduced and heartily sang along with her performance.