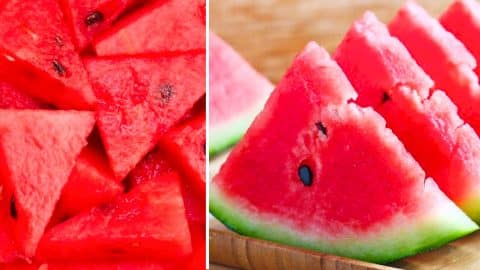 To salt or not to salt? That is the question, and these Southern chefs have answered it!

There is an age-old debate on whether or not you’re supposed to add salt to a juicy slice of watermelon. Those who do it argue that the salt enhances the sweetness.

People who don’t salt their watermelon, or people who haven’t even heard that it’s a thing, prefer the juicy fruit as it is.

But which way is right? Luckily It’s A Southern Thing spoke to some of the best Southern chefs to see what the right way is to eat a slice of watermelon.

Chris is the executive chef for Big Bob Gibson Bar-B-Q in Decatur, Alabama. He says, “I’m not a big salt-on-my-watermelon guy. I understand it, but in the same breath, I don’t put salt on the rim of my margaritas, either.”

Chef Kevin Johnson is a James Beard Award finalist and the owner and executive chef at The Grocery in Charleston, South Carolina.

He says, “I do salt my watermelon — typically with a chili-lime salt that you buy at the Latin supermarket. It’s a mixture of chili powder and lime zest and salt. And I love that on watermelon.”

He says, “I do not salt my watermelon. I learned from home economics that if the belly of the watermelon has a yellowish color, it is already sweet. And I would pick my own melon looking for the yellow part of the belly, and the darker the yellow, the sweeter the melon. I became pretty good at picking a sweet melon, so no salt was necessary.”

Chef Nick Bishop is kind of famous when it comes to Southern eating. He is the co-founder of Nashville’s famous restaurant Hattie B’s Hot Chicken and the owner of Bishop’s Meat and Three in Franklin, Tennessee.

He says, “I don’t. Watermelon is just such an incredible dish, and when you get the right watermelon, it doesn’t need anything. It needs to be ice cold. Put it in a cooler for a day or so before you break it open, but no salt on my watermelon.”

Elizabeth Heiskell is a chef who wrote the cookbooks The Southern Living Party Cookbook and Somebody Stole the Cornbread from My Dressing. She is also a contributor on The TODAY Show.

She says,”It just kind of depends on the watermelon. If it’s super, super sweet, I don’t. If it needs a little help, I’ll add some salt.”

Chef Dolester Miles is a James Beard Award-winning pastry chef at Highlands Bar and Grill as well as Bottega Cafe and Chez Fonfon. All three establishments are in Alabama.

She says, “Oh my God, yes. Don’t let my doctor hear that, but yes. It brings out the flavor, and it is so good — especially if you get it good and cold.”

He says, “When I was a kid, I did (add salt) because my mama did. Then I decided to be all healthy in the ’70s and ’80s and I quit doing it. And recently, I put a little bit on there again and I thought, ‘You know, Mom was probably right about that.’ You know what they say: Old folks know best. So, I guess I’m an old folk now.”

As you can tell, there really is no winner in this debate – it’s all about what you prefer!

Who do you agree with? Do you put salt on your watermelon?