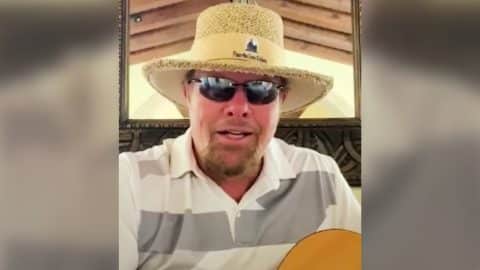 In 1952, Bill Trader wrote a song titled “(Now And Then There’s) A Fool Such As I.” The song has the narrator lamenting over the end of his relationship with the woman he loves.

Hank Snow was the first artist to record the tune. It was an instant success, and was a Top 10 hit on the US Country chart (now the Hot Country Songs chart).

Other artists saw how successful the song was, and rushed to record their own renditions. It didn’t just stay in the country realm either, as artists such as R&B and jazz singer Tommy Edwards and pop singer Jo Stafford lent their voices to the song.

It was also famously recorded by Elvis Presley. His version was a number two hit in the U.S. and a number one hit in the UK. It has since been certified Platinum in the U.S.

While “A Fool Such As I” has been recorded by other artists such as Bob Dylan and Baillie & the Boys, Presley’s recording remains the most recognizable.

So it was Presley who Toby Keith tried to emulate when he delivered a cover of the song from Mexico.

Keith was stuck down in Mexico for a bit and was using his spare time to sing covers of old-school country songs like “A Fool Such As I.” He left his guitar behind in the States, so he bought an old guitar from a furniture store in Mexico to help back him up for these cover performances.

Sometimes Keith briefly introduced the cover songs he picks=ed, but he didn’t do that with “A Fool Such As I.” He moved right in to the song!

You can tell Keith was mimicking Presley’s way of singing. Since Presley’s rendition of the song was so notable, it makes sense why Keith would opt to channel him through his own performance.

It’s clear Keith had a fun time delivering his cover, because he signed off with a laugh and a smile before his video ended. You can check out that video below.

We’ve been loving these classic country covers of Keith’s! Which song would you like to hear him sing?