‘Whiskey And You’ Goes Acoustic In Performance From Aaron Lewis 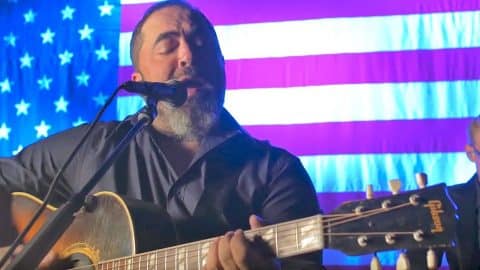 If you line up three artists and ask them all to sing one song, none of them will sing it exactly the same. As a result, each artist ends up transforming the song into their own.

That’s exactly what happened with the song “Whiskey and You.” While many may think that it was just a track on Chris Stapleton‘s chart-topping album Traveller, that is not the case. It turns out that the song’s history stretches back a few more years than Stapleton’s recording.

Stapleton was not the first artist to record “Whiskey and You,” but he did serve as one of its co-writers. The song was first recorded by Tim McGraw, who included it on his 2007 album Let It Go.

Although McGraw never released “Whiskey and You” as a single, the song still generated a good deal of attention. Stapleton apparently had enough faith in it to include it on Traveller, which was released in 2015.

“Whiskey and You” was transformed yet again when it fell into the hands of Aaron Lewis. He decided to cut the song for his second solo studio album Sinner, which was released in 2016.

Thanks to Lewis’ rendition of “Whiskey and You” and the ten other outstanding tracks on the album, Sinner was a major chart success. It debuted at the number one spot on the Top Country Albums chart and crossed over to debut at the fourth spot on the all-genre chart.

“Whiskey and You” is a naturally stripped-down song, but Lewis decided to take things down one more notch for a special acoustic session. Lewis later shared footage from the new rendition on his official YouTube channel.

You can enjoy Lewis’ acoustic version of “Whiskey and You” by tuning in to the video below.