4 Artists Won “The Voice” On Team Kelly – Where Are They Now?

By Miranda Raye on January 19, 2022
Advertisement 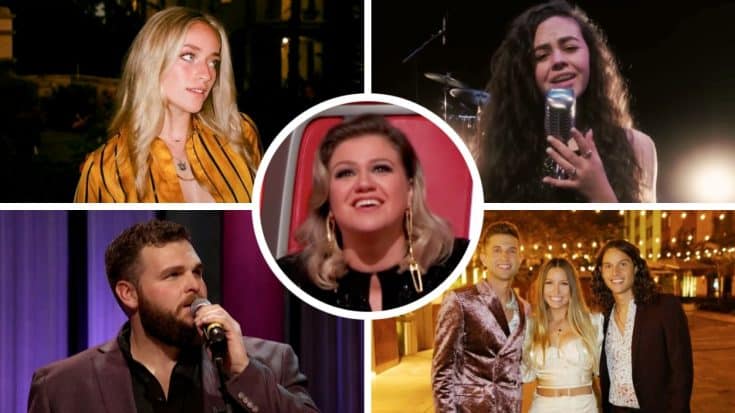 Kelly Clarkson has coached eight seasons of The Voice…and she has won four of them! She most recently won Season 21 with sibling trio Girl Named Tom.

By winning the show, Girl Named Tom helped their coach make history in more ways than one. For starters, they were the first non-solo act to win The Voice. On top of that, their win led to Clarkson breaking a record set by former coach Adam Levine.

Blake Shelton reigns supreme as the Voice coach with the most wins (he has eight). Levine was previously in second place, with three wins to his name. Now, Clarkson has surpassed him.

Not much time has passed since Girl Named Tom won The Voice, but they’ve already been making strides in their career. Keep reading to find out what they and the other three Voice winners from Team Kelly are up to today!

Clarkson won her debut season of The Voice (Season 14) with pop and soul singer Brynn Cartelli. Cartelli was (and still is) the youngest person to ever win The Voice. She was 14 for part of the competition, and turned 15 just a month before the finale.

Cartelli began releasing new music immediately after her big win. Her debut single, “Walk My Way,” reached the third spot on the Digital Songs chart in 2018. Its followup single, “Last Night’s Mascara,” reached the 19th position on the same chart.

Clarkson continued to support Cartelli by featuring her as one of her opening acts on her 2019 Meaning of Life Tour. Cartelli has also returned to The Voice multiple times to promote her new music.

In May 2021, Cartelli released her debut EP, Based on a True Story. The EP reached the seventh spot on the iTunes Albums chart.

Clarkson scored a back-to-back victory when Chevel Shepherd won Season 15 of The Voice. Shepherd was only 16 years old at the time. She was also the first country artist to win the show that wasn’t a member of Team Blake.

In 2019, Shepherd got the chance to sing “God Bless America” prior to the Indianapolis 500. That same year, she (and Cartelli) joined Levine’s band Maroon 5 on their Red Pill Blues Tour.

Shepherd dropped her debut EP, Everybody’s Got a Story, in March 2021. The EP included the song “Just Like The Circus,” and its official music video has over 140,000 views on YouTube.

Then-31-year-old country singer Jake Hoot led Clarkson to her third Voice win during Season 17. Just a few months later, Hoot made his debut at the Grand Ole Opry. He has since performed on the Opry stage many times.

Hoot released his debut single, “Better Off Without You,” in 2019. The song reached the 36th spot on the Hot Country Songs chart. He also charted with covers of “Desperado,” “Wintersong,” and “Amazed.”

Clarkson and Hoot reunited in 2021 and released a duet titled “I Would’ve Loved You.” The song’s official music video has generated over 4.6 million views since it was posted on YouTube.

Hoot and his former coach have performed their duet on The Voice and on Clarkson’s talk show The Kelly Clarkson Show. He was back on her show in December 2021 to sing “When Christmas Has Come and Gone” with The Tenors.

On a personal level, Hoot married Brittney Hoyt in 2021. The past few years have been pretty eventful for him!

After their big win, Girl Named Tom quickly released a new Christmas song, “No Snow for Christmas.” They said the song was inspired by a past warm Christmas in their home state of Ohio when there wasn’t a single snowflake in sight.

In January 2022, Girl Named Tom made their daytime TV debut on The Ellen DeGeneres Show. They performed a cover of James Taylor‘s “Carolina in My Mind” while they were there. Watch their performance below.

We can’t wait to see what Girl Named Tom is able to accomplish in the future. They, Cartelli, Shepherd, and Hoot are all super talented!