By Miranda Raye on October 14, 2021
Advertisement 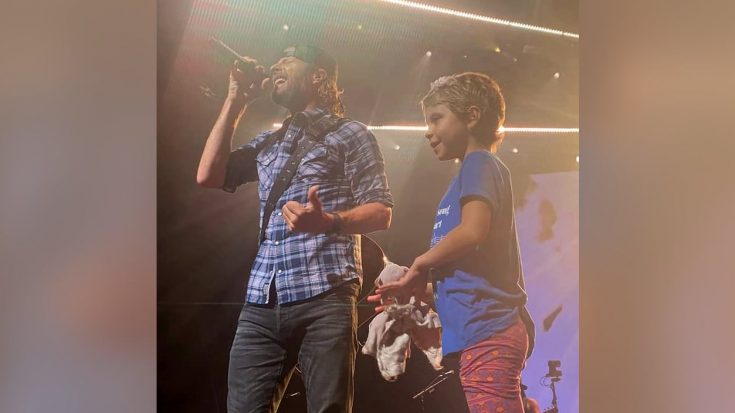 Co-written by Travis Meadows and Steve Moakler, “Riser” tells the story of someone who refuses to give up when facing challenges in life. As the chorus goes:

Bentley knew as soon as he heard “Riser” that he had to record it. Speaking to Billboard in 2015, he said, “I really feel like the song is going to help people who are going through a hard time. I know it’s connecting, I know it has that effect.”

Six years have passed since “Riser” was released as a single, and it continues to speak to Bentley and his fans.

Bentley performed at the Riverbend Music Center in Cincinnati, Ohio, on October 8, 2021. During the concert, he noticed a sign in the front row of the crowd that referenced “Riser.” According to Southern Living, it said:

“Kicking Cancer’s Butt! It is just a MOUNTAIN. So, I’m here LIVING because I’m a RISER.”

The sign was being held by seven-year-old Myla Brickner, who is battling leukemia. “Kids and cancer man, that is not good, so we’re going to send this one out to you,” Bentley said before he started singing “Riser.”

Then, Bentley had Brickner join him on stage for the end of the song. He later spoke about their interaction on social media:

“Had a special moment tonight with a little girl named Myla, who is the true definition of a Riser… thank you for being an inspiration to us all..keep fighting the good fight,” he wrote.

The girl’s mother told Music Mayhem that her cancer is currently in remission:

“She does have a high chance of relapse, but nothing has brought her down. She just smiles and takes life one day at a time. Music and concerts are her go to for happiness.”

Look below to see a few videos of Bentley singing “Riser” for this incredible young cancer warrior. The last post is from Brickner’s mom…and it’s sure to make you emotional.