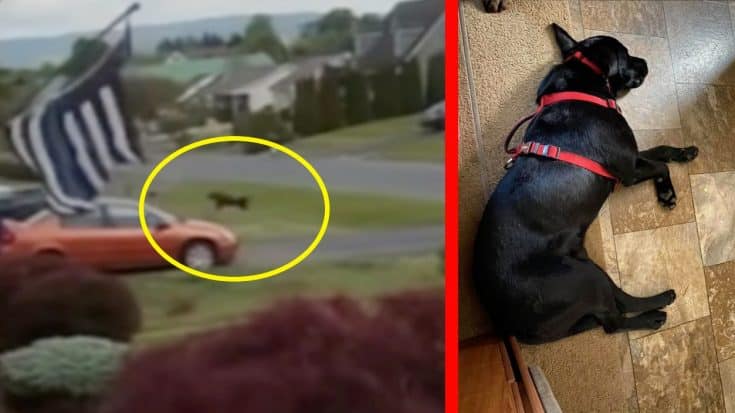 In Weyer’s Cave, Virginia, a 70-pound black lab named Duke got the surprise of his life when he was picked up into the air and flipped around by a really powerful dust devil.

#wawx Yesterday's dust devil chase was a success. Caught probably the most powerful dust devil I've ever seen. Conservative estimate of 60+ mph winds and probably over a 1000' feet tall. We let the kids try to run in some of the weaker ones, not this nasty boy though… pic.twitter.com/b8PV2RbPHn

Brittany Wampler, Duke’s owner, first heard about his journey into the air from her kids.

They couldn’t believe what they saw — and Wampler wasn’t sure whether she should believe them either. She asked a neighbor to see footage from their doorbell security camera that had her front yard in view in order to get to the bottom of the kids’ claims.

Little did she know, the pup’s adventure was a lot crazier than she could have imagined!

“Well Duke the flying lab is ok, thank goodness, and I didn’t entirely believe my kids at first but to see it with my own eyes…can’t deny it. He’s not up for autographs yet, we’ll keep ya posted ????‍♀️?,” she said on Facebook.

It’s likely that a dust devil caused Duke to lift off of the ground. A dust devil is a quick but very strong whirlwind, named for the swirl of dust created when the phenomenon occurs in dry environments.

In most cases, dust devils don’t cause anything more significant than a quick, swirly uprising of dust. In other cases, however, dust devils can grow so strong that they can cause harm to property, people, and animals.

Don’t worry — Wampler said that the dog is completely fine after his airborne adventure.

Check out the full video below – and let us know if you’ve seen anything like it before!