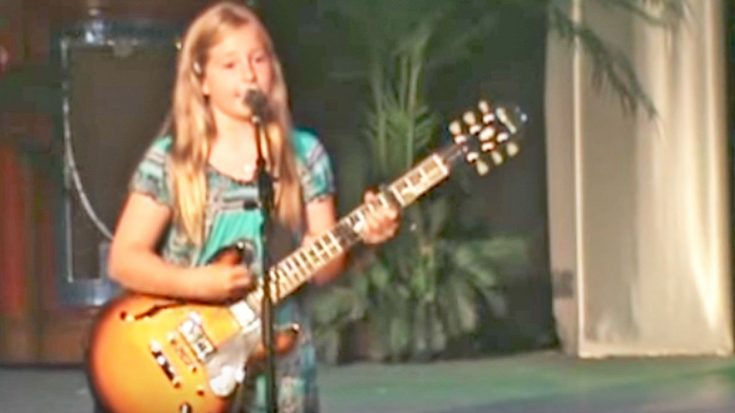 While the song came out decades prior to her birth, 11-year-old Erin Kinsey sure has a talent for performing this Loretta Lynn classic! Taking place at Farr Best Theater in Mansfield, Texas back in July of 2012, the aspiring country singer delivered a spot-on rendition of “You Ain’t Woman Enough (To Take My Man),” the young vocalist dropping jaws in the process.

“This song doesn’t really relate to an eleven-year-old,” Erin joked prior to her performance. “My parents thought that and I really wanted to sing this song, so we had to make a deal. I mean the good news is I get to sing it with you all, but the bad news is I can’t like date until I’m like thirty-five.”

Armed with her acoustic guitar, the talented young vocalist delivered a pure country rendition of Lynn’s ’60s megahit. Masterfully nailing every note while expertly strumming along, it really is only a matter of time before we see her name in lights.

“You Ain’t Woman Enough (To Take My Man)” was written and recorded by Lynn in 1965 after the country music icon met a woman backstage at one of her concerts. The woman confided in Lynn that another woman was conspiring to take her man, Lynn replying “Honey, she ain’t woman enough to take your man!”

﻿You can watch Erin’s rendition of “You Ain’t Woman Enough” below.