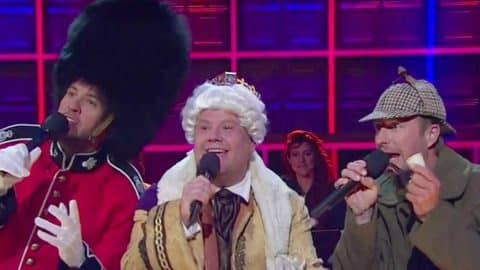 If Dierks Bentley is nervous about his first time hosting the Academy of Country Music Awards you’d never know it. Bentley joined his ACM Awards co-host, Luke Bryan, on The Late Late Show with James Corden to perform the first ever British country song called “Jolly Good Honky Tonk In The U.K.”

“Now my beloved Britain has been a leader in nearly every genre of music, however there is one genre that has never quite made its way across the pond. And that is country music,” explained Corden. “So, tonight I’ve enlisted the help of two country stars to change that by writing Britain’s first ever country music hit.”

With Corden dressed as British royalty, Bentley as Sherlock Holmes, and Bryan as a Royal Guard, the trio delivered a hilarious song filled with a mix of British terminology set to a classic country tune that sounds suspiciously similar to John Denver’s “Thank God I’m A Country Boy.” The result was as hilarious as one can imagine. See the full video below!

Bryan and Bentley will be hosting the ACM Awards on Sunday. Tune it to CBS to see the action!