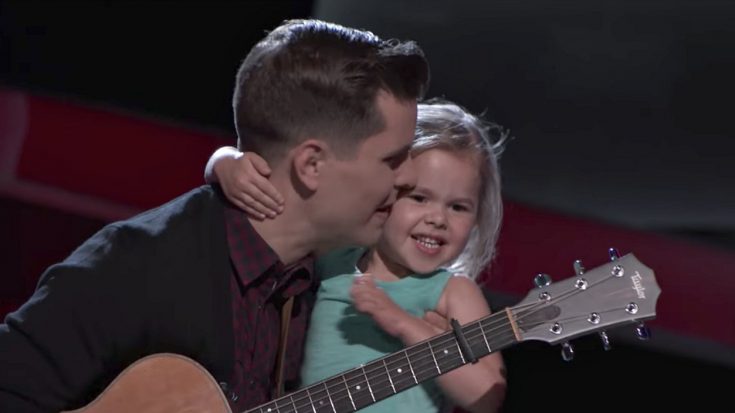 The Voice is back! If Monday night’s season premiere is any indication of what’s to come, we’re in for an amazing season.

Dave Crosby was just one of those who delivered a jaw-dropping Blind Audition. You may recognize Dave for his duets with his 4-year old daughter Clair Ryann. The videos were viewed by millions and their success caught the eye of Ellen DeGeneres who has had the father-daughter team on her show numerous times.

But, until now, the Seattle native hasn’t had a chance to show off his true vocal chops. During Monday’s season premiere, Dave and his guitar hit the stage without Clair for a haunting cover of “I Will Follow You Into The Dark.”

The judges were clearly entranced by Dave’s smooth voice and it didn’t take long for judge Adam Levine to turn his chair. Blake Shelton and Miley Cyrus followed suit, leaving Dave with a tough decision.

New coach Jennifer Hudson asked Crosby what inspired him to sing. “I had kind of given up on music then four years ago, when I held my little daughter for the first time,” Crosby responded. “It turns out that she turned out to be an incredible little singer for a four year old. She made a couple of viral videos….”

A shocked Adam Levine then interrupted Crosby when he realized that he had in fact seen his viral videos. Jennifer Hudson then asked if Claire was there with her dad and asked the two to give an impromptu performance of their viral cover “You’ve Got A Friend In Me.”

A fearless Claire joined her dad on the stage and brought the crowd and judges to their feet as she sang.

“You just melted the hearts of everyone in this country,” Adam said of the pair.

“Dave, I want you on my team, but I really want to have her,” Blake Shelton told Dave who laughingly responded by saying, “Story of my life.”

Miley Cyrus argued that Dave should pick her to be his coach because she can relate to the father-daughter bond he shares with Clair.

“I started my career at four years old doing the same thing your little girl is doing right now,” Miley told Dave. “So my dad taught me everything I know about music and I relate to that story a lot.”

Blake plead with Dave to join his team by offering a game plan. “We’ll get you going as an artist then we’ll co-manage your daughter.”

As Claire watched excitedly from backstage, Dave eventually chose to be a part of Team Adam.

Watch Dave Crosby’s (and Claire’s) audition in the video below.