Hank Jr. Invites Non-Country Fans To ‘Come On Over To The Country’ In Rowdy Music Video 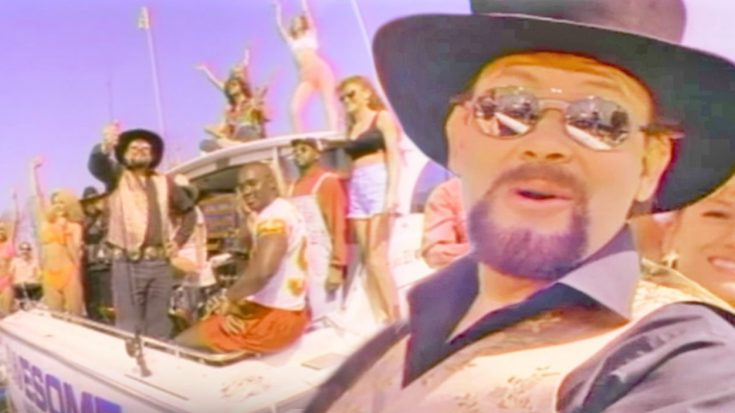 With any type of music, there always seems to be those select people who really dislike anything related to that genre. In the legendary Hank Williams Jr.’s music video for “Come On Over To The Country,” he addresses these people face-to-face.

The music video begins in black and white with a group of grungy rockers, who are wearing leather jackets and sporting long hair, hanging out in a bar during the day. The bartender asks one of them to put a box in the back room when another man volunteers to help instead.

After setting the box down, the man uncovers a small TV playing a video of Hank Jr. singing “Family Tradition.” By the looks of it, he was a closet country music fan and did this quite a bit.

All of a sudden, Hank Jr. kicks in the door and begins singing his early 90s song “Come On Over To The Country.” He seems to aim the openings lyrics directly at this man, singing, “You said you’d never be caught dead/Listening to people sing with hats on their heads/Well my how times have changed!/Did you get tired of heavy metal and chains?“

The country legend tells the man to follow him and they go through town and end up in a huge field with a lake filled with hundreds of country music fans. Once they show up to the “country,” the music video changes to color. The hard-rocking man trades his bandana for a cowboy hat and is introduced to the rowdy world of country music.

“Come On Over To The Country” was included on Hank Jr.’s 1992 album Maverick. The album reached the Top Ten on the Billboard Top Country Albums chart and has been certified Gold by the RIAA.

Watch the “Come On Over To The Country” music video below.