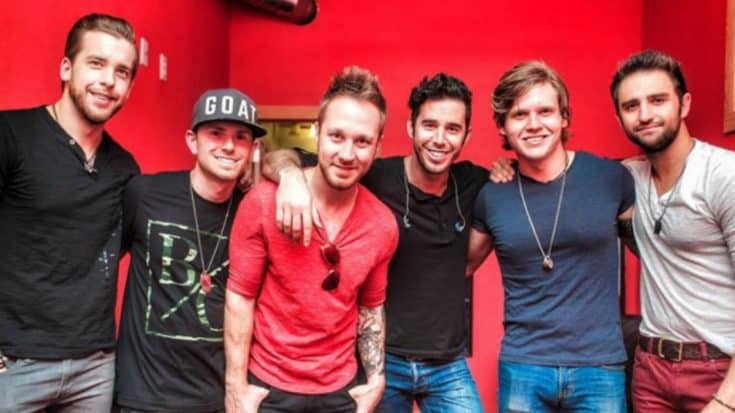 What happens when a group of guys meets at church and bonds over a common love of music? For the guys of Backroad Anthem, there was only one option. Form a band. In October 2012, six friends from Fayetteville, Arkansas, stepped on stage for the first time as country cover band Backroad Anthem and knew they had something special. The band was formed as a way to make “side money,” but after selling out their first three shows, Backroad Anthem knew they were on to something great. Little did they know just what was in store for their group.

More than a week ago, the lead singer of Backroad Anthem, Craig Strickland, went missing during a late-night duck hunt on an Oklahoma lake during a winter storm. The body of his friend and hunting buddy, Chase Morland, was recovered just one day after the men’s boat capsized. It was another week before Strickland’s body was found.

During the week-long search for Strickland, his wife, band mates, and other family members showed amazing strength and peace as they kept the public updated on the status of the search. As each day went by, Backroad Anthem’s following grew. The group’s social media accounts saw a surge in their following as people were drawn to their story, giving the members of the group a chance to introduce new fans to their friend and lead singer, Craig Strickland.

Just one day after Strickland was found deceased, lying in the shape of a cross on the shore of Oklahoma’s Kaw Lake , 75-yards from where his friend’s body lay just a week before, Backroad Anthem released a new music video for their song ‘Torn.’ According to the band’s Facebook post, “Last year we shot a music video for our song, Torn. We wanted to finally release the video and share with everyone so you could have a chance to see Craig doing what he loved. We are so proud of how it turned out, and we know Craig was too.”

While Strickland doesn’t sing lead on ‘Torn’, our eyes are drawn to Strickland in the video as his contagious smile and energy are impossible to miss.

Craig Strickland will be laid to rest this week, but we have no doubt that Backroad Anthem will keep making music and will honor their friend’s legacy as long as they are able.

Check out the video for ‘Torn’ by Backroad Anthem below.

Last year we shot a music video for our song, Torn. We wanted to finally release the video and share with everyone so you could have a chance to see Craig doing what he loved. We are so proud of how it turned out, and we know Craig was too