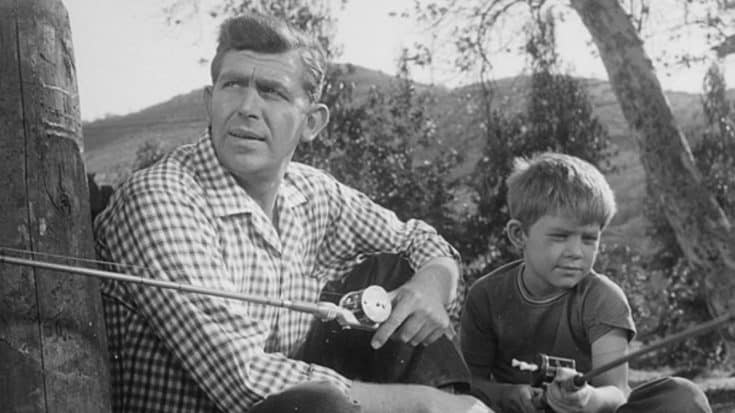 One of the most recognizable theme songs in the history of television is “Fishin’ Hole,” the catchy, whistled tune that opens and closes every episode of The Andy Griffith Show. But, did you know that the song originally had lyrics?

Before producers of The Andy Griffith Show decided that the tune needed to be whistled, Andy Griffith himself, aka Sheriff Andy Taylor, recorded a version of the song with lyrics. “Fishin’ Hole” was written in less than fifteen minutes by Earle Hagen and Herbert Spencer.

Well, now, take down your fishin' pole and meet me at the fishin' hole, … pic.twitter.com/3cKlbHcAMD

The rarely heard lyrics were written by Everett Sloane who was known for composing theme songs for The Dick Van Dyke Show, I Spy, and The Mod Squad. The simplicity of the song was intentional as a way to reflect the nature of The Andy Griffith Show.

“I realized what the show needed was a simple tune. So I spent all of 15 minutes writing it. I called my bass player and drummer, and we recorded it in a little studio in Hollywood. I whistled the tune myself,” said Hagen.

It should come as no surprise to fans of the show that Andy Griffith was originally chosen to sing the theme song. Much of The Andy Griffith Show plot revolved around music including Andy lazily picking on his front porch on Sunday afternoons and the infamous Darlin’ clan who lit up Mayberry with their backwoods bluegrass.

If you’ve never heard Andy Griffith sing Fishin’ Hole, you’re in for a treat! Check out the video below.

Well, now, take down your fishin’ pole and meet me at The Fishin’ Hole,

We may not get a bite all day, but don’t you rush away.

What a great place to rest your bones and mighty fine for skippin’ stones,

You’ll feel fresh as a lemonade, a-settin’ in the shade.

Whether it’s hot, whether it’s cool, oh what a spot for whistlin’ like a fool.

What a fine day to take a stroll and wander by The Fishin’ Hole,

I can’t think of a better way to pass the time o’ day.

We’ll have no need to call the roll when we get to The Fishin’ Hole,

There’ll be you, me, and Old Dog Trey, to doodle time away.

If we don’t hook a perch or bass, we’ll cool our toes in dewy grass,

Or else pull up a weed to chaw, and maybe set and jaw.

Hangin’ around, takin’ our ease, watchin’ that hound a-scratchin’ at his fleas.

Come on, take down your fishin’ pole and meet me at The Fishin’ Hole,

I can’t think of a better way to pass the time o’ day.