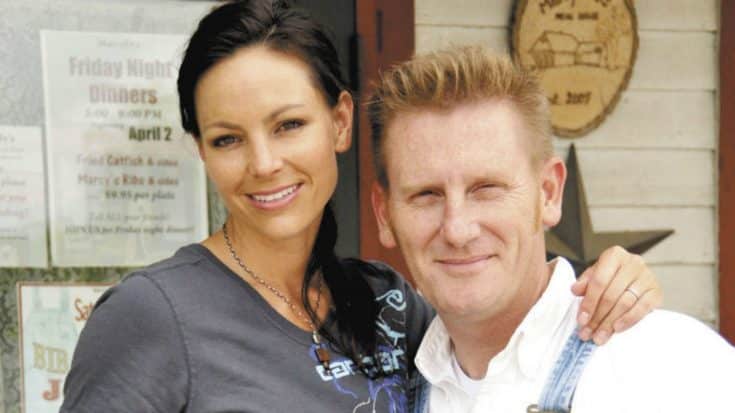 In 2008, Joey+Rory became a household name thanks to a new reality singing competition on CMT. The couple’s third place finish on Can You Duet? followed by a series of television commercials for Overstock.com would in time lead to an enormous fan base that would be a precious addition to the Joey+Rory equation.

In a touching new blog post shared by Rory Feek, he explains the reason behind their stage name of Joey+Rory and why they chose to use a plus-sign as opposed to “and” or “&.”

In 2008, as the couple was going through the process of being cast for CMT’s Can You Duet?, they were asked what their stage name was going to be.

“When we found out we had made it through the first round of auditions, they asked us what our stage name was going to be.  I told Joey that I think we should tell them ‘Joey+Rory’, because that’s what it actually was…

Fast forward to 2016, almost 8 years after Joey+Rory was introduced to the world. Rory admits that when they made the decision to audition for Can You Duet? they had no idea how their lives were going to change or just where their music would take them.

“In hindsight, I think I was right about the plus-sign in Joey+Rory, but not about the math.

One-plus-one does not equal two.  It actually equals much, much more.

And the plus-sign?  I’ve come to realize through the years that it’s not what I thought it was either.  It’s more too.”

Rory shares that without realizing what they were doing when they made that decision years ago, they were actually adding more than just the two of them together. They were adding God to the equation. That addition would carry them through the ups and downs of their music career, and years later through a brutal cancer battle.

“Each time Joey and I have made a conscious choice to ‘add’ someone else into our lives, God uses His mathematics to turn us+others into something more beautiful than we could’ve ever experienced on our own,” Rory writes.

“And it’s not just people.  It’s time.  When the plus-sign has been giving away the most precious thing that we have – our time – to others.  It too turns into something bigger.  And our world gets better.”

The most precious addition of all has been their daughter, Indiana. Rory admits that while he and Joey have faith that God will see them through this difficult time, they still have questions.

“But why? Why would He give us such an incredible addition, and allow it to be followed by such a heartbreaking subtraction?

I cannot even begin to imagine going home to Tennessee without Joey, or living my life and raising Indy without her… but chances are, that day is coming.”

In the meantime, the couple is making the most of every day they have together.

“And so Joey and I do our best each day to only see the plus’s in our life.

…like all the extra days and weeks that we’ve been given together (the doctors here didn’t expect Joey to make it to Thanksgiving, and here we are near the end of January), and all the beautiful conversations and time we’ve had with her family.  And the amazing gift of life-slowing-down-to-a-crawl and only having and needing THIS moment in time. And of course, the incredible amount of love and support that the whole world has shown for us during this special time.”

Watch Joey+Rory’s audition video for Can You Duet? below.