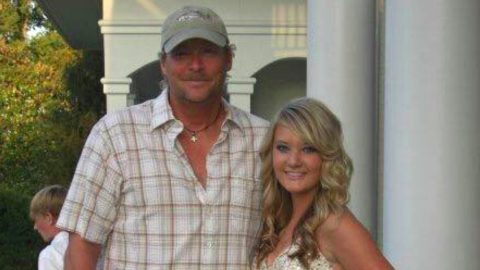 Grammy Awards, CMA Awards, ACM Awards, membership in the Grand Ole Opry. You name it and Alan Jackson has achieved it. But, until Wednesday (April 5), there was one honor that had eluded the star…..membership in the Country Music Hall of Fame.

Jackson was announced as one of the 2017 Country Music Hall of Fame inductees, an honor that the humble singer doesn’t feel worthy of.

“Even though I’ve done a lot, I still don’t feel quite worthy, but I feel like it’s an honor to qualify for what it requires to be in here with these great people,” Jackson told Rolling Stone. “I’ve always tried to make music the first priority – not being a star, not being in the spotlight, just trying to make music that I loved, that the fans like, and not compromise that to fit into something else.”

While Alan may not feel worth of the recognition, his family believes he deserves all of it and more. In a beautifully written post on Facebook, Jackson’s middle daughter Ali acknowledges her dad’s accomplishments as an artist, and also as her father and “best friend.”

“The world sees you as follows: a great musician, an impressive song writer and a talented vocalist. I see you as: my best friend, the guy that taught me that how you treat people matters more than anything else and taught me just how to stand on my own two feet,” the 23-year old writes. “You’re every daughter’s dream father. Thank you for raising us in a house filled with Jesus and music, and always making sure we knew whatever our dream was could be our reality.”

Ali is one of three daughters Alan Jackson shares with his high school sweetheart and wife of 37 years, Denise. It was Denise who is credited with helping her husband get his career off the ground after a fateful meeting with none other than Glen Campbell. While working as a flight attendant, Denise met Campbell and told him about her talented husband. Campbell took Alan under his wing and helped the rising star score a contract with Arista Records.

As they say, “The rest is history.” Jackson would go on to become one of the biggest stars in country music, selling more than 80 million albums, winning two Grammy Awards, 16 CMA Awards, and 17 ACM Awards. Few other artists have rivaled Jackson’s accomplishments, proof that his Country Music Hall of Fame induction is well-deserved.