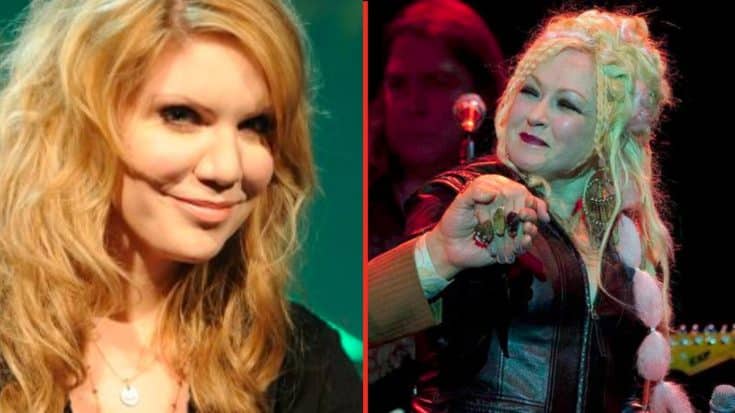 It has long been debated about whether or not “Hard Candy Christmas” is a Christmas song at all. The song was made famous by Dolly Parton in 1982 when she sang it in the movie The Best Little Whorehouse in Texas.

Many artists have covered the tune, but including June Carter Cash and Reba McEntire. Now another artist has added her name to the list. Award-winning musician and pop culture icon Cyndi Lauper recorded her version of “Hard Candy Christmas” for Detour, her album of classic country covers.

The “Girls Just Wanna Have Fun” singer recruited none other than bluegrass goddess Alison Krauss to share her vocals on the recording. Lauper, a long-time fan of country music, also enlisted the help of Emmylou Harris, Willie Nelson and Vince Gill for the new album, something she considered a major bucket list item.

“To be able to sing with those people was incredible in the first place. I’ve always been a fan of Alison Krauss and Emmylou Harris, and, to tell you the truth, even Vince Gill,” Lauper told Vanity Fair. “Vince Gill is such an amazing guitar player and a real, just all-around great artist. I was excited to work with him because I felt that if anybody understood that cowboy swing stuff, of course, him and the Time Jumpers—they know that like the back of their hand.”

The addition of Alison Krauss to “Hard Candy Christmas” was a brilliant move for Lauper. Krauss is one of the few artists with a voice capable of blending with any singer from any genre. Her voice brings a melancholy and country feel to Lauper’s cover of the Dolly Parton tune. Check it out for yourself below.