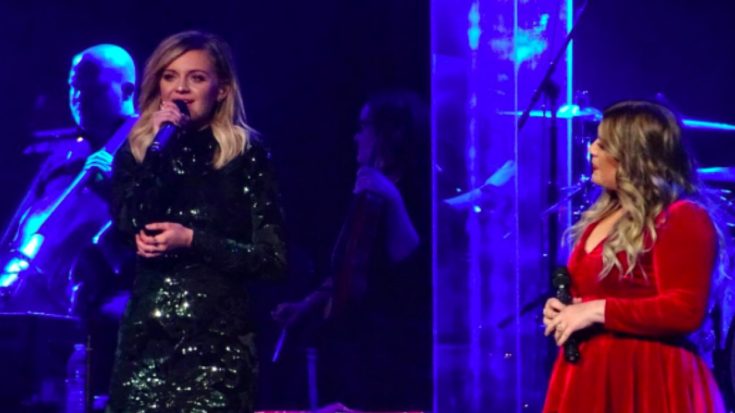 Prior to Friday’s event, Clarkson shared the motivation behind her involvement with the Miracle on Broadway concert.

“I am in love with Christmas, first of all; I love Christmas music,” Clarkson said. “Sometimes people have a few low points and need a little help, and then they’re back to where they were before, in a year or two. It’s an important thing, I think, for every community to do.”

One of the highlights of this year’s concert was when Kelsea Ballerini joined Kelly Clarkson on stage for a moving rendition of the 1940’s hit “Have Yourself A Merry Little Christmas.” The moment was unforgettable not only because the performance was spot-on, but because it was a full-circle moment for the two.

Kelly recalled the first time she met Kelsea, before the country newcomer had even released her first song.

“It was so funny,” Kelly remembers. “My bus was parked at an event in town and I was singing with Miranda Lambert and Reba. Kelsea showed up at my bus, and she was like ‘Hi! I seem real stalker-ish, but I’m a fan!’ She was so sweet and just so nice. She was like, ‘Yeah, I’m a new artist!’ She hadn’t come out yet, so it’s really cool how full circle that is, and we’re performing together.”

Check out Kelsea Ballerini and Kelly Clarkson’s flawless take on the Christmas classic, “Have Yourself A Merry Little Christmas” below.