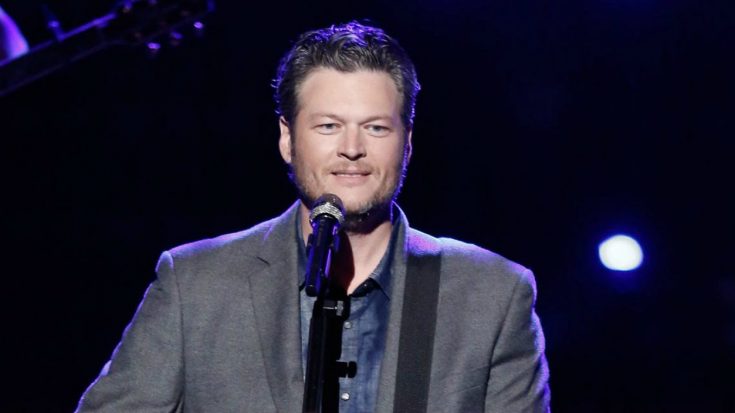 Blake Shelton took the stage during Tuesday night’s elimination episode of The Voice to perform his new single, “A Guy With A Girl.”

Shelton’s performance was a welcome reprieve from the intensity surrounding the fact that half of the remaining competitors were being sent home before next week’s season 11 finale.

“A Guy With A Girl” is the fourth single off of Blake’s May 2016 album release, If I’m Honest. Prior to Tuesday’s performance, Blake revealed that the tune is about the love of his life, Gwen Stefani. The two started dating in October of 2015 after meeting on The Voice, so it only seems fitting that Blake perform the song in the very place where their relationship began.

While Shelton didn’t pen the tune, it seems tailor-made for the singer.

“‘A Guy With a Girl’ is my life right now,” says Shelton. “Out on the farm or touring, [I’m] that guy, and then at the end of the day, when it’s time to have a life and go to a party or something, I become the guy that’s with Gwen. It’s pretty cool.”

The song was penned by Ashley Gorley and Bryan Simpson and presented to Shelton when he was still married to Miranda Lambert. While the song suited his relationship with Lambert, he chose to hold the song. While recorded If I’m Honest, Shelton brought the song out and knew it was time to record it.

“Everywhere we go, whether it’s my hometown in Tishomingo [Oklahoma] or some fancy party in Hollywood, when she comes around, it’s like people just stop,” Blake said of Gwen Stefani. “And I don’t blame ’em.”

Watch Blake Shelton perform “A Guy With A Girl” live on The Voice in the video below.