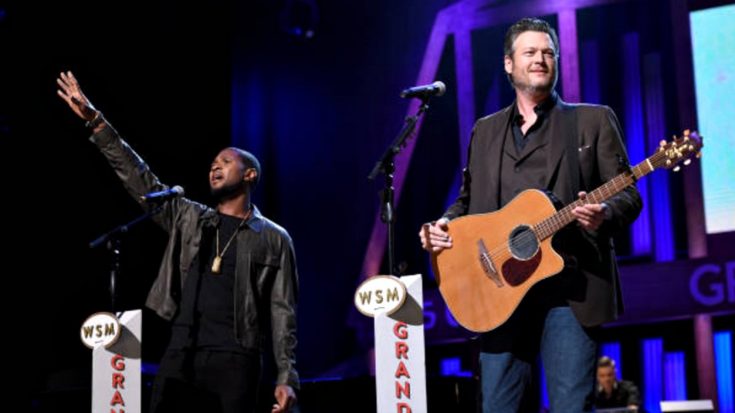 Stars of film, music and television came together Tuesday night (September 12) to raise money to help victims of recent hurricanes that devastated parts of the southern United States. “Hand In Hand: A Benefit For Hurricane Relief” aired live from various cities around the country including Nashville, San Antonio, New York City and Los Angeles.

Blake Shelton was on hand in Nashville where he was joined by former ‘Voice’ coach Usher for a stunning collaboration. This wasn’t the first time the two vocalists have teamed up for such an event. In 2013, Shelton hosted a telethon to raise money for the victims of the Moore, Oklahoma, tornado that took the lives of 24 and destroyed hundreds of buildings. During that telethon Shelton and Usher performed his mega-hit “Home.”

This time, Usher traveled to Nashville to join Blake on the hallowed Opry stage where they wowed the crowed with their performance of Ben E. King’s “Stand By Me.” The packed Opry House joined in near the song’s end making for a chill-inducing moment .

The telethon raised nearly $15 million during the broadcast, but that number is expected to rise as the phone banks remain open overnight. To make a contribution to “Hand In Hand,” please click here.

Watch Blake Shelton and Usher perform “Stand By Me” in the video below.