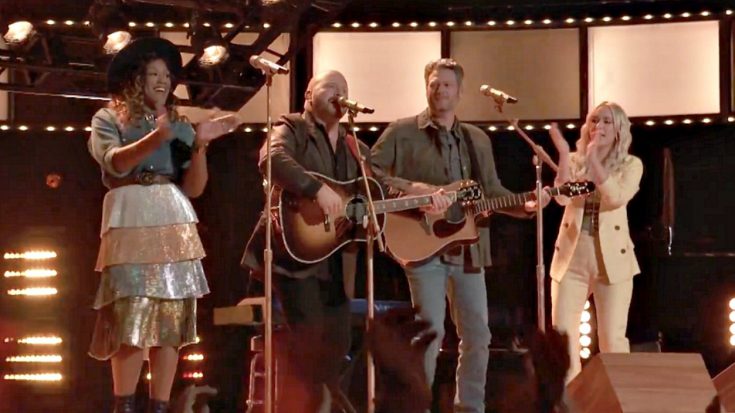 With only three members left on his team, Blake Shelton pulled out all the stops for his group performance during an elimination episode of The Voice.

Team Blake’s Red Marlow, Keisha Renee and Chloe Kohanski joined their country music megastar coach in a dance-worthy performance of Hank Williams Jr.’s “If It Will, It Will.” In a surprise move, Keisha and Chloe were named safe by host Carson Daly and will be moving forward in the competition. Meaning Red Marlow was in danger of being eliminated.

But, Marlow wasn’t in danger long as Team Adam’s Jon Mero and Adam Cunningham found themselves at the bottom when Carson Daly revealed that they were in danger of elimination and could only be saved by the live public vote.

Voice fans chose to save Cunningham, making Jon Mero the first casualty of Season 13’s live shows. It also meant that Team Blake would stay in tact moving into the following week’s competition.

Watch Blake Shelton and his team as they perform Hank Williams Jr.’s “If It Will, It Will” in the video below.