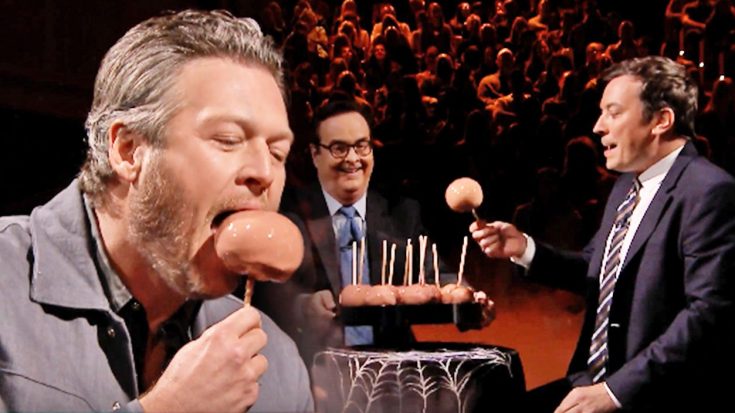 When a guest goes on The Tonight Show Starring Jimmy Fallon, there’s a good chance they will be playing a game with the host. When Blake Shelton is the guest, you can be darn sure that the game is automatically funnier than normal.

Jimmy surprises Blake Shelton with a throwback picture during his interview.

Playing a variation of The Tonight Show‘s popular game Egg Roulette, Shelton and Fallon faced off in a suspenseful game of Caramel Apple Roulette. They were presented with 12 “caramel apples.” Eight of them were real caramel apples, while four of them were raw onions smothered in the sugar sweet topping. Shelton and Fallon each had to choose one to take a bite out of and the first person to bite into two onions loses.

After hearing the rules, Shelton said, “This is the dumbest thing yet!” referring to his previous appearances on the show where he tried sushi for the first time…

And when he taught Fallon how to milk a cow.

After choosing his first “caramel apple,” Shelton started to stall by saying, “I’m only here because Seth Myers was booked!”

Each funnyman took their turn and they BOTH bit into raw red onions, despite how confident they both were! The game was now tied 1-1 and again, it was Shelton’s turn to pick an “apple.”

This was one of the shortest Roulette games we’ve seen on The Tonight Show because Shelton’s second pick was an onion again, meaning he lost! Frustrated, he joked that he would likely sell no albums because of the game!

Every time these guys get together, we can’t stop laughing, even during their interview!

Watch the hysterical game below.