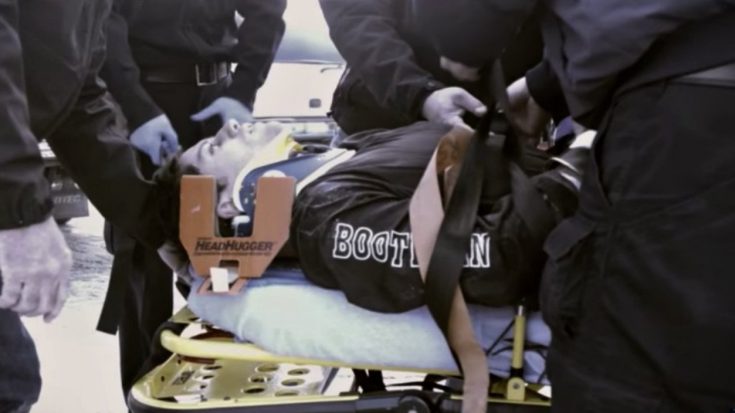 Professional bull rider Bonner Bolton is making a name for himself on Dancing With the Stars not only for his fiery chemistry with his professional dance partner Sharna Burgess, but because of his incredible story of determination and resilience.

Bolton, 29, suffered a devastating injury in January of 2016 when he dismounted from a bull and landed wrong, breaking his neck. The injury would end Bolton’s professional bull riding career, but it would take more than a broken neck to keep him down.

The video of Bolton’s horrifying accident was aired during Monday night’s episode of DWTS, and the bull rider relived the moment that he thought he wouldn’t make it.

“I came off out of control on my bull and just sorta landed upside down on top of my head,” Bonner recalls. “I heard the crunch. My arms were out there, but I couldn’t move them. That bull could have totally finished me off right there.”

Bonner’s father and fellow bull rider, Toya Bolton, said that he knew that something was wrong when he saw his son’s failed dismount. “I was hoping my greatest fear wasn’t coming true,” Toya said through tears.

“They rolled me over, but the looks on their faces was devastating. I knew that it was bad,” Bolton said.

Bolton was paralyzed from the neck down, but regained mobility after the swelling subsided. After surgery and months of rehabilitation, Bolton was doing better, but was struggling to remain positive.

“There were hard, dark times,” he told PEOPLE. “The pain medicine was making it hard for me to hold on to any positive thoughts. I sort of wanted to end it all. But I got rid of the meds and started pushing myself to get better.”

His career as a bull rider may have been over, but other opportunities came his way. In the midst of his recovery, Bolton was signed to a modeling agency.

“I never thought I could do that as a career,” he says. “I’m extremely humbled by it.”

The bull rider-turned-model has won over millions of viewers on Dancing With the Stars, but it hasn’t come without a cost.

“It’s been challenging on my body,” says Bolton. “My neck hurts every day.”

Watch footage of Bonner Bolton’s horrifying bull riding accident below along with the emotional dance he and Sharna Burgess performed in honor of Bolton’s most memorable year.