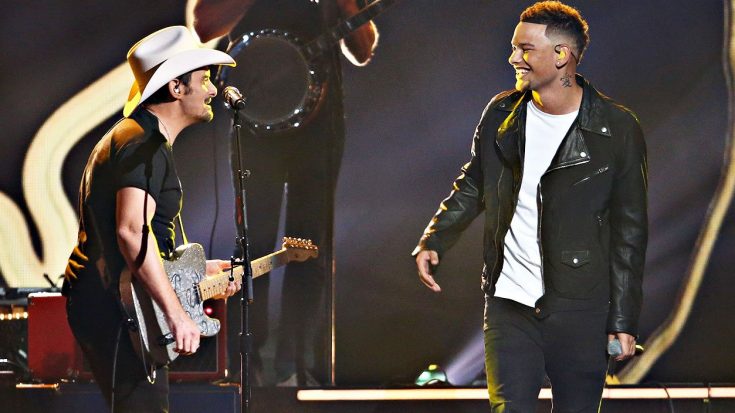 Country megastar Brad Paisley and his younger colleague, Kane Brown didn’t hold anything back when they appeared on stage during the 2017 CMA Awards in Nashville – and the crowd loved every single minute!

Having already teased their upcoming performance across various social media channels, both Paisley and Brown hinted at what kind of magic they would be bringing to the stage and they did not disappoint!

Paisley recently released his single “Heaven South” from his most recent album, Love & War, while Brown issued his own single titled “Heaven” to country radio in recent weeks.

To perform alongside Paisley is a real dream come true for Brown who says he has been singing Paisley’s songs ever since he was just a kid.

“It’s one of the greatest feelings in the world,” Brown gushed prior to his performance with Paisley. “I’m pumped, it’s going to be awesome.”

Together these two vocal powerhouses brought the roof down on the CMA Awards with a stunning collaboration on Paisley’s tribute to southern life, “Heaven South.”

Watch their blessed and beautiful performance in the video below and let us know what you think in the comments.

THESE GUYS! Brad Paisley and Kane Brown are amazing together! #CMAawards.