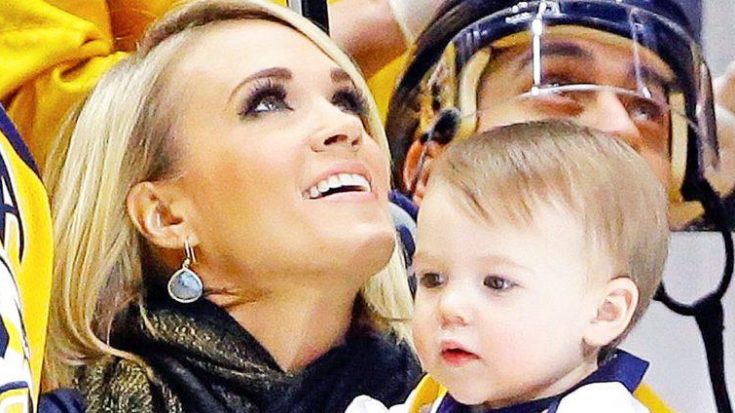 Carrie Underwood has stayed out of the spotlight since a fall outside her home in November left her with a broken wrist and more than 40 stitches to her face. But, that doesn’t mean that the “Jesus, Take The Wheel” singer is slowing down.  She recently went back into the studio to work on a new project in addition to maintaining a workout schedule and making the most of her time with her family.

In a post made to Instagram on Saturday, 34-year old Underwood shared photos of her 2 1/2-year old son, Isaiah, joining her and her hubby, Mike, for a workout. The photo shows Isaiah imitating his mom’s workout moves as he is positioned for a perfect squat. In the second photo Isaiah is seen doing push-ups alongside his dad.

Even though Carrie Underwood hasn’t made a public appearance since her fall, she has continued to remain one of country music’s most successful female artists. Just last week, Underwood and the NFL premiered the music video for “The Champion,” a song that the singer co-wrote as a theme for the Super Bowl. Immediately following the video’s premiere, “The Champion” shot to the top of the iTunes charts, making an impressive leap from it’s previous 14th position.

Check out Carrie Underwood’s video for “The Champion” below.

.@carrieunderwood kicks us off on the biggest Sunday Night of them all.

Watch the #SuperBowl now on NBC or stream: https://t.co/Q1JrUmZiy2 pic.twitter.com/Awxc9zikfF