Danica Patrick Breaks Down In Tears As She Ends Career 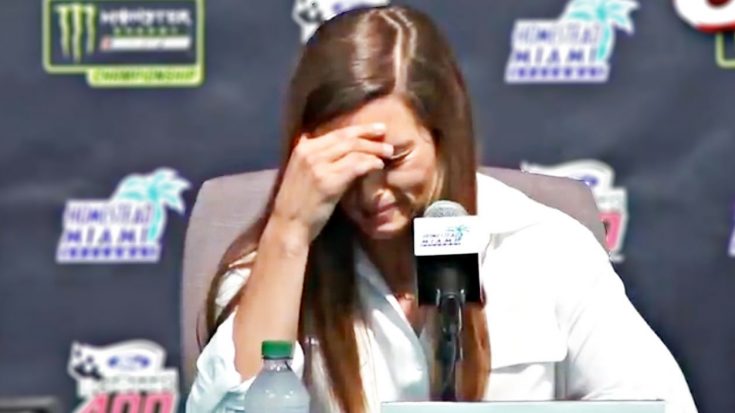 She was overwhelmed with emotion and began sobbing on camera as she announced the heartbreaking closure to her full-time racing career – a change that would be hard for any driver to swallow.

Not ready to retire, Danica Patrick was met with a series of unfortunate circumstances regarding sponsorship and performance during the 2017 season, and due to these bumps, her contract was not renewed and Patrick was faced with a looming decision.

Fearlessly charging head-first into a sport dominated by men, Patrick never backed down during her tenure on the track and she quickly gained momentum as one of the most recognizable and visible figures in NASCAR.

The 35-year-old driver sat down at a press conference earlier today (November 17th) to announce the closure to her full-time racing career and became inundated in emotions – to the point that she visibly broke down on camera and had to regain composure.

“Nothing that was being presented excited me, then about three weeks ago, I just blurted out, `What about Indy? Let’s end it with the Indy 500,'” she continued. “This ignites something in me. But I am done after May. Everyone needs to put their mind there. My plan is to be at Indy, and then I’m done.”

In a statment to the AP, Patrick confessed that it took her a long time to come to the conclusion that her career was headed toward the end. She will compete in the Indy 500 next year, but her team and sponsor were not announced.

“I know I always said I’d never go back to Indy, and I was always being honest,” Patrick said. “Well, things change. I know now you can never say never. I’d been going through this in my head and kept asking myself, `How am I going to get the words out and say it’s over?’ And trust me, I lost my (stuff) a few times over that.

Watch Danica Patrick’s press conference in the video below and let us know what you think in the comments.