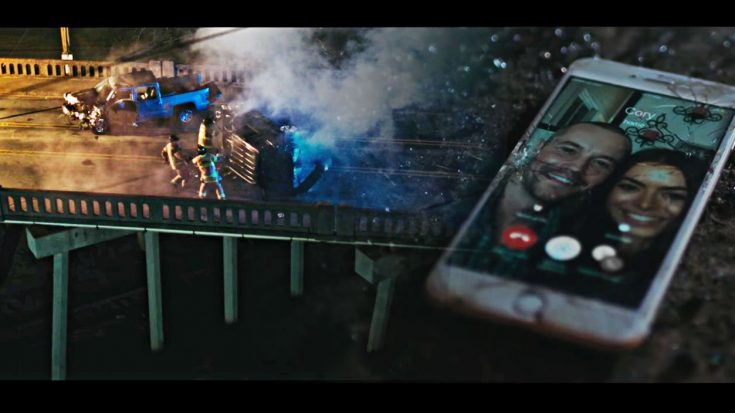 His latest single that’s storming the charts gets a music video that will have you gasping in the last few seconds – and even Luke Combs himself says that folks might not be expecting it.

Guess you could say we had a good writing session January 14, 2015.

Hot off his debut album, This One’s for You, Combs searing new single about heartbreak, lost love, and the reminder that all we have could be taken away in an instant has gotten a music video that adds an incredible new visual layer to the tune.

See Luke Combs’ moody performance of "One Number Away" on #LSSC https://t.co/tnjbZW5H8M pic.twitter.com/JumHKxMvNm

“One Number Away” is Combs’ third single from his album and has already charted in the Top 40 during its initial run on country radio.

The song tells a story of someone desperately wanting to reach out to their former lover and reconnect after righting a wrong. The theme is summed up in just two powerful lines, “And I’m one number away from calling to you / I said I was through but I’m dying inside.”

Right before stage last night a few people told me that someone sang “One Number Away” on @NBCTheVoice. His name was @Kameron_Marlowe and turns out he’s from NC too. Rob found his number through the Gastonia grapevine and we congratulated him. Good pick @blakeshelton pic.twitter.com/iFvSGoG9Tj

The video shows a side of the story many might not have seen from just listening to the song, and it ends in a horrifying tragedy that is a tearful reminder of how short life is.

A couple who had separated each is yearning to reach out to the other, but keep holding themselves back. As they go through their daily lives, they constantly think of the other and the special times they shared. It isn’t until one of them breaks down and dials the other’s phone that the video takes a very unexpected twist.

Watch Luke Combs’ brand new video for “One Number Away” below and let us know what you think.