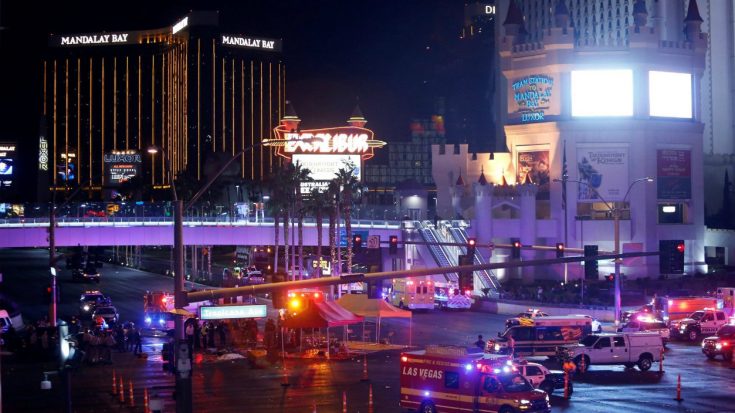 More than 50 people have been killed in what authorities are calling the deadliest mass shooting in U.S. history.

The shooting took place late Sunday (October 1) during the Route 91 Harvest Festival, an annual country music festival held near the Mandalay Bay Resort and Casino in Las Vegas. Two-time ACM Entertainer of the Year Jason Aldean was on stage when a gunman opened fired on the crowd.

The Las Vegas Police Department said the suspected gunman, 64-year old Stephen Paddock, was shooting from the balcony of a 32nd floor room of Mandalay Bay hotel. Police tracked down the shooter and he is now deceased. A female person of interest was also later apprehended.

Numerous videos and photos posted to social media by those in attendance show the chaos as people fled the scene and sought safety. Videos also show Aldean running from the stage as shots ring out.

Country star Jake Owen was just one of several other country artists who were at the festival performing. Owen spoke with radio host Bobby Bones Monday morning (October 2) and described the heartbreaking scene that he witnessed, saying that he saw people laying in the streets as he made his way to the parking lot.

“It’s literally like a bad movie. Like something you dream and think you’re going to wake up at any point,” Owen said. “I’ve heard guns fire. This sounded like a full on automatic rifle just unloading. At that point you could see Jason was out on the catwalk and he just put his guitar up in the air and starting running back toward the drum set to get off the stage. That’s when you knew…People just started fleeing in the crowd. I’ve never seen anything like this before.”

We heard from @jakeowenofficial whose still in the parking lot of Route 91 Festival in Vegas where the shooting happened. **(May be sensitive content for some viewers)**

Country Rebel will keep you up to date as this situation develops.

To donate to the verified GoFundMe account to help the victims’ of the Las Vegas shooting, click here.