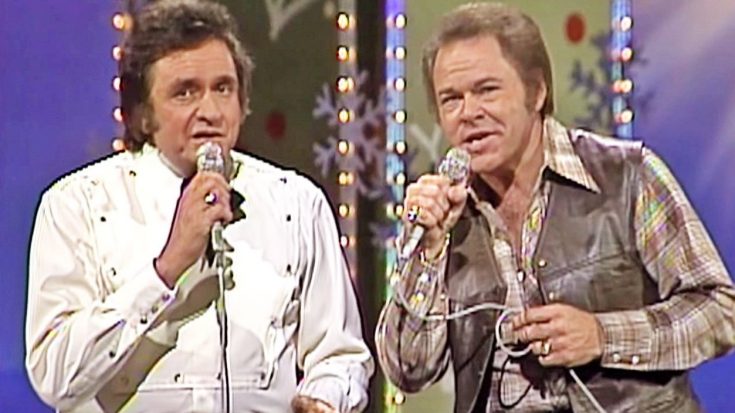 Two country legends came together to ring in the holidays in quite the popular fashion. As part of The Johnny Cash Christmas Special, country singer Roy Clark joined his friend on stage for a magical Christmas mashup. Cash put on the special several years in a row with high-demand from his fanbase. Every year, Cash hosted alongside his wife June Carter with help from some talented acts.

Cash and Clark sat side by side on the stage to begin their performance together. Cash, who was sporting a fancy white blouse started off the show with a tribute to “The Singing Cowboy” Gene Autry. Singer and songwriter, Autry is widely known for his famous Christmas hits, “Rudolph the Red-Nosed Reindeer,” “Frosty the Snowman,” and of course, “Here Comes Santa Claus.” Cash shares his successes before singing “Here Comes Santa Claus,”

“In the memory of Gene Autry, who comes back with three gold record hits.”

The second he opens his mouth to sing, the crowd is already roaring with applause. As Clark looks over at his friend he begins to smile before singing “Frosty the Snowman.” Cash sits back until the two join again for the chorus in perfect harmony. The music starts to fade out and Cash looks toward the distance.

Right then, the country legend jumps back in for the tune of “Rudolph the Red-Nosed Reindeer.” The two singers take turns between verses, admiring each other’s talents. Right then, the audience goes crazy as you see the rest of the acts join the duo on stage. All together they sing the famous song to close out the performance.

The three holiday tunes flawlessly intertwined with one another made for an overall unforgettable performance. Following, the show was met with rave reviews, immortalizing itself well into four decades after its initial airing.

What an enchanting performance by two legends. You can watch it all go down in the video below!