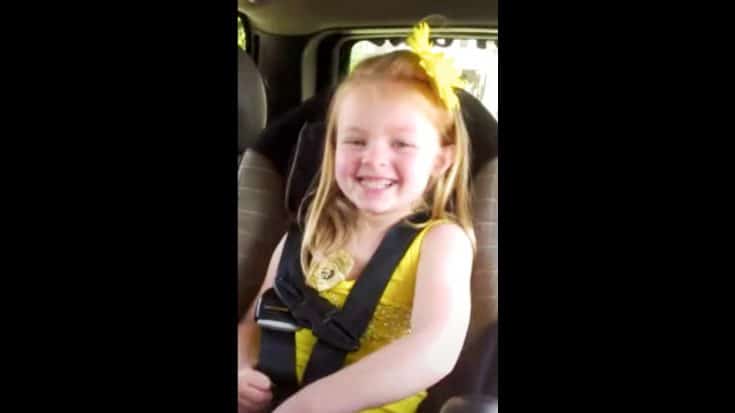 One little girl named Gracie loves Blake Shelton, and his 2013 single “Boys ‘Round Here” seems to be her favorite song.

Whenever the track comes on the radio, Gracie can’t help but sing along. And who can blame her?

“Boys ‘Round Here” was the second single released off of Shelton’s album Based On A True Story… The song peaked at the #1 spot on the Billboard U.S. Country Airplay chart, and climbed up to the 12th spot on the U.S. Billboard Top 100.

The song is certainly at the top of Gracie’s chart as well, as she instantly starts smiling as soon as she hears the opening of the familiar tune.

Dressed up in a bright yellow outfit and looking like a drop of sunshine, Gracie was so excited to start singing that she actually came in too soon to kick off the song. She giggled when she realized she made a mistake.

Once Gracie does start singing, she gives the song just the right amount of country sass. She also doesn’t stop smiling the whole time, and it’s obvious she was having a blast singing along with Shelton.

Watch Gracie’s adorable rendition of “Boys Round Here” in the video below. Over 200,000 people have watched the clip since it was posted in 2013!

Gracie would be much older today than she is in this video, but we’d like to think she’s still a big fan of Shelton and his music.