By Manly Bryant on April 11, 2018
Advertisement 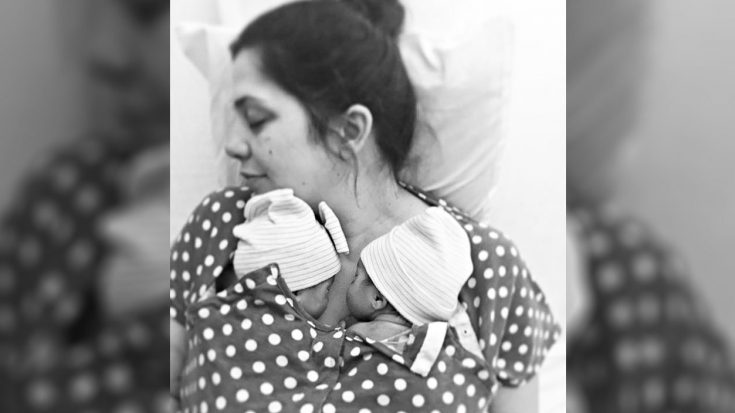 She admits that she was extra emotional after finding out that she was pregnant again following a heartbreaking miscarriage – and called it a double blessing when she found out she was having twins.

Lady Antebellum‘s lead singer, Hillary Scott, and her husband Chris Tyrrell welcomed their first child, Eisele nearly five years ago – and they had always wanted to have multiple children.

After suffering a devastating miscarriage in 2015, Scott revealed that this new pregnancy felt different – in multiple ways.

“We were taking it a week at a time. ‘When are we going to announce this news?’ Because I wasn’t sure,” she told People.

The pair announced their pregnancy in August 2017 and welcomed their double bundles of joy on January 29th, 2018…but there were a few bumps along the way.

Our family is thankful and proud to announce the arrival of our precious baby girls. They were born in the early hours of January 29th, 2018 and we can’t wait to share more about them in the days to come. Thank you to everyone who prayed and prayed for these little ladies, and thank you Lord for healthy babies. #twins

Scott tells the publication that she felt a great deal better during her pregnancy with the twins than during the one in which she miscarried.

“And because that was a long process, it took me a while to fully recover after the miscarriage just because it was physically and emotionally [difficult],” she continued. “This time around, I slept a lot.”

While she felt better, Scott admits that she had “double the fatigue” and that she experienced immense nausea – usually right before going on stage for a show.

“I didn’t know if I would’ve been able to make a handful of shows because there just were some close calls.”

In the short period since she welcomed her two beautiful identical twin girls, Scott has called the joyous addition a “double blessing from the Lord,” adding that “it was just one of those things. I was like ‘They’re meant to be here.'”

Thank you @people for sharing our journey to a family of five. Truly feeling blessed beyond measure! And E&B’s fuzzy hair on their heads…I can’t even. ??? ???????????? ? : @labellumhs ?: @juliepaisleyphotography