“I Will Always Love You” Gets Moving ‘Voice’ Remake 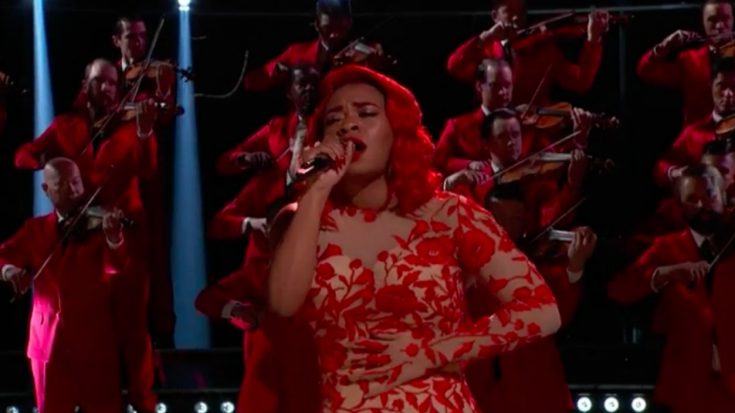 Few songs have crossed genre lines with great success, but Dolly Parton‘s hit song “I Will Always Love You” proved that it is possible. Parton took the tune to the top of the country charts multiple times and Whitney Houston brought a whole new fan base to the song with her rendition that spent 14 weeks atop the pop charts.

“I Will Always Love You” is not only one of the best selling singles of all time, but one of the most covered. With as many versions as have been recorded, it’s rare to find a unique cover, but during Monday night’s episode of The Voice Ali Caldwell did just that.

Caldwell, a member of Team Miley, took the stage during the semi-final round where she delivered one of the most heart-wrenching performances of her career.  Dressed in red and backed by a choir of violins, Caldwell radiated confidence as she made the song her own.

Ali Caldwell has been a favorite from the beginning so we expect to see her in the finals going into next week.

Check out Ali Caldwell singing Dolly Parton’s “I Will Always Love You” in the video below and let us know if you think she has what it takes to win Season 11 of The Voice.