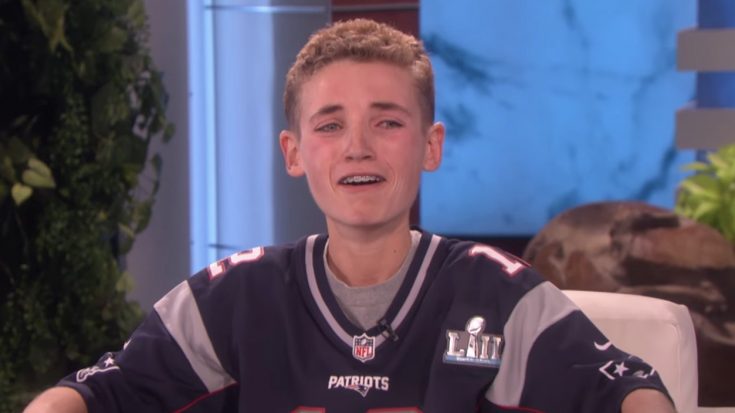 Justin Timberlake may have performed during halftime of last week’s Super Bowl, but it was New England Patriots fan Ryan McKenna who found himself the star of the show.

During the closing song of Timberlake’s halftime show, he made his way into the crowd as he sang “Can’t Stop The Feeling.” 13-year old McKenna made his way to the superstar and happened to be in just the right spot when Timberlake stopped and took a photo with the teen. McKenna’s face spread like wildfire across the internet with fans dubbing him the luckiest kid alive.

McKenna appeared on numerous television and radio shows in the days that followed, including an appearance on The Ellen Show. The poised and excited teen told Ellen about the moment that changed his life forever.

“I got myself there. I pushed through…I was elbowing people,” McKenna said.

Ellen then surprised McKenna with a phone call from Justin Timberlake himself who had a surprise of his own.

“I tell you what I want to do,” he began, “because it was so unexpected that you came down and because all of this has happened, I thought to myself I really wanna meet you properly.”

Timberlake invited McKenna and his family to attend his concert in Boston as his special guests. The NFL topped it off with a VIP experience to a Patriots home game next season that includes four tickets to a game and four pre-game field passes.

Watch Ryan’s emotional reaction to Justin Timberlake’s surprise in the video below.