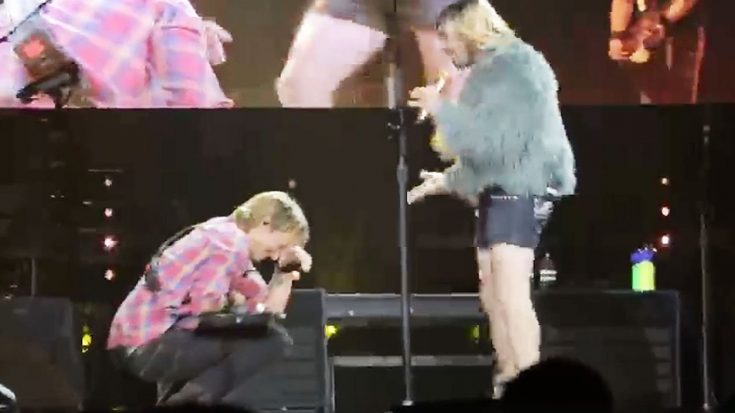 Country music superstar Keith Urban was giving his 2016 Ripcord World Tour audience one heck of a show when his duet partner turned out to be someone he wasn’t expecting at all.

As Urban’s duet with Miranda Lambert, “We Were Us,” echoed through the venue, he waited patiently for Maren Morris to walk on stage to sing Lambert’s part, but the person who walked out wasn’t Morris.

Sporting a crop top, fur jacket, and some very short shorts, a man in a blonde wig stole the show as he lip synced to the vocals and worked it across the stage!

Urban fell to his knees and covered his mouth, bursting into laughter at the unexpected guest appearance. The Morris impersonator strutted his stuff and put some serious attitude into his performance, only to be upstaged by Morris herself rocking a strikingly similar outfit.

Both singers were all laughs in light of the prank, casually transitioning back into their duet. Urban posted the encounter to his Facebook page and fans could not get enough of it! Check it out for yourself!