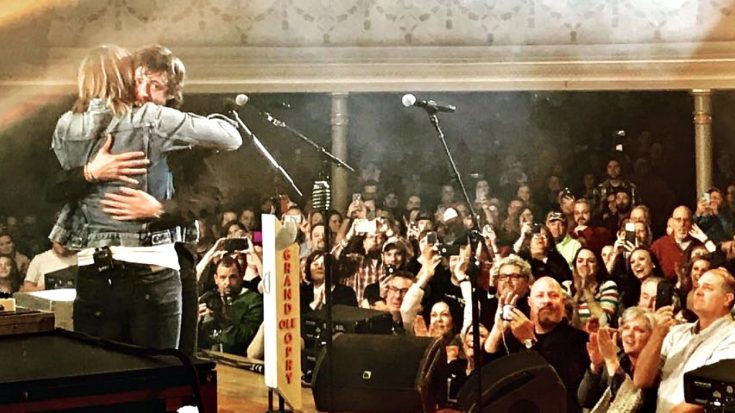 Monday night was a night of celebration for country singer Chris Janson! In addition to playing his first headlining show at the Ryman Auditorium, Janson’s buddy and fellow country star Keith Urban surprised him on stage with an invitation to join the Grand Ole Opry family.

Janson knew that Urban would be appearing to perform with him, but never expected that Keith was hiding a huge surprise.

“I am a member of the Grand Ole Opry,” Keith told the crowd. “I remember the feeling the night that I got invited. It’s an incredible feeling and I think it’s about time you feel that way too, Chris.”

Chris began to jump up and down as he realized what was happening. His wife then joined him on stage. As they celebrated. the crowd cheered knowing that they were witnessing a rare part of country music history.

According to the Tennessean, just days before Janson’s Opry surprise he expressed his love for the Opry saying, “The two things I always wanted in this business were to play the Opry and be on the radio, that’s it,” he said.

Janson, a songwriter and renowned harmonica player, charted his first No. 1 in 2015 with “Buy Me a Boat.” He celebrated his second chart-topping hit with “Fix a Drink” in 2017.

A huge congratulations to Chris Janson!

Watch Keith Urban surprise Chris with an Opry invitation in the video below.

BREAKING: @janson_chris has just been invited to become the newest member of the Grand Ole #Opry by @KeithUrban! pic.twitter.com/dq4a2AJeFT