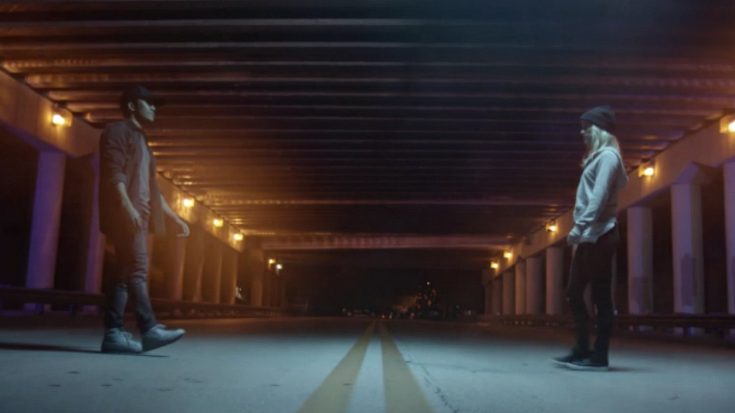 In early February, Keith Urban released the official music video for “The Fighter,” his catchy collaboration with Carrie Underwood.

The original video featured the two in a boxing ring with Underwood dancing around Urban as they go back and forth vocally.  The video also features a street dancer breaking it down to the tune.

Urban and Underwood performed “The Fighter” during Sunday night’s ACM Awards show in Las Vegas. Urban released a “dancers version” of the music video to coincide with the ACM Awards. The clip highlights the dancing skills of Lindsay Richardson, who appears in the original music video, and Lyle Beniga.

Richardson and Beniga choreographed their moves for the video remake, and John Urbano directed the new video.

“John said, ‘I know this girl who dances, sort of street dancing; I don’t even know what it is,’” Urban recalls in a press release, “but it was so good, and John said, ‘Listen to the song and watch her dance at the same time,’ and they just went together so incredibly well that we decided to put out a full ‘dancers’ version.’”

Urban was inspired by his relationship with wife Nicole Kidman to write the lyrics for “The Fighter.”

“I literally thought about Nic and I and our relationship in the beginning,” Urban shared.  “and some of the things we had said all went into that song.”

Watch the new version of the music video for “The Fighter” below.