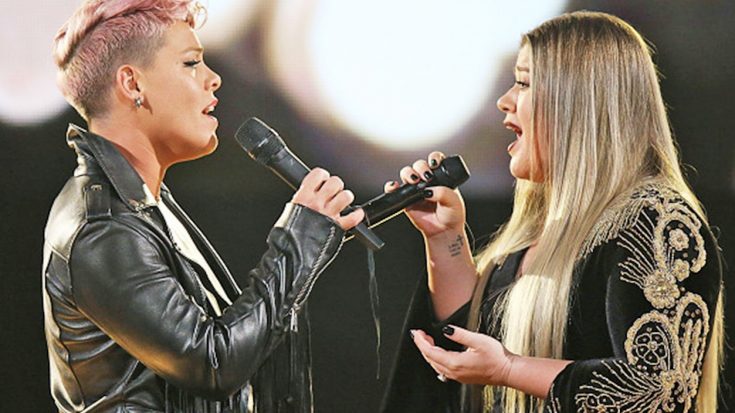 “We needed the power of music to help us heal…2017 was the year that tested our faith,” Jamie Foxx said to introduce “two of the world’s most powerful voices” to the stage of the 2017 American Music Awards.

This past year has been wrecked with seemingly unending bad news. Kelly Clarkson and P!nk joined forces for the first time in hopes of helping the nation heal through the power of music, the pair opening the AMAs Sunday (Nov. 19) with a striking rendition of R.E.M’s “Everybody Hurts.”

Prior to their performance, Foxx introduced a number for first-responders who assisted in recent tragedies, the heroes standing behind him on stage as he delivered an inspiring speech after thanking them for their bravery.

“As this year comes to a close we look forward to 2018 with hope. For, even as we mourn those who were lost, we know this: Together our strength will pull us through. Together we shall overcome the pain. Together we can unite as a people and as a nation,” said Foxx before the popstars’ performance.

Clarkson and P!nk took the stage, their powerful voices blending beautifully throughout their somber cover, the first-time collaborators ending their performance with a hug and standing ovations from the audience.

“Everybody Hurts” was released by R.E.M. off their 1992 album Automatic for the People, the song reaching success on an international level.

You can watch their rendition of “Everybody Hurts” below.