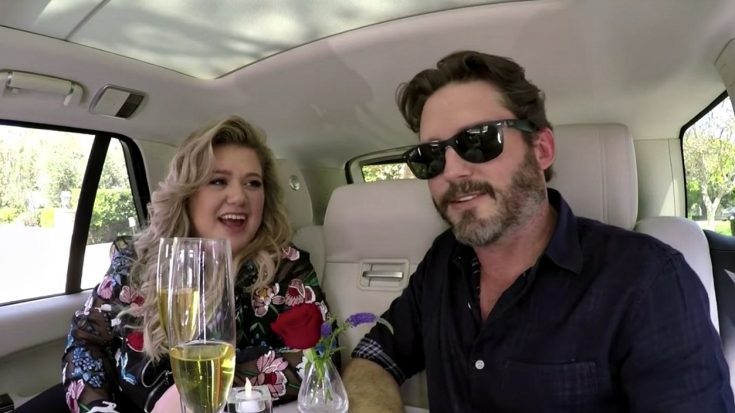 When The Late Late Show‘s James Corden started his Carpool Karaoke segment in 2011, he had no idea that he would end up sharing the front seat of his car with some of the world’s biggest stars and that the segment would become his most trademark.

During Wednesday night’s episode of The Late Late Show, Corden was joined by mega star Kelly Clarkson and the two sang along with some of the American Idol champ’s biggest hits including “Since U Been Gone” and “Because Of You.” But the segment took an unexpected turn when the host surprised Clarkson with a date with her husband, Brandon Blackstock.

“Do you get to spend a lot of time together outside of work?” Corden asked Clarkson of her husband who also serves as her manager.

“I think it’s difficult because, obviously, I work a lot and I’m a mom. But, we try,” Clarkson replied.

Corden then informed Kelly that he felt that she and her husband needed to reconnect. “I thought maybe we could arrange a date night for you and Brandon…right now.”

As Clarkson moved to the back seat, her husband joined her and the couple was served chocolate covered strawberries and some bubbly as a violinist played romantic music from the passenger seat. The date quickly got awkward as Kelly and Brandon attempted to make conversation.

“So I got a report from the farm today,” Brandon told Kelly who burst into laughter before telling the cameras “He’s so nervous.”

The couple, who married in 2013, first met in 2006 at a rehearsal for the Academy of Country Music Awards where Clarkson was performing a duet with Rascal Flatts. Kelly and Brandon now share four kids, including 16-year old Savannah and 10-year old Seth (Blackstock’s children from a prior relationship), and 3-year old River Rose and 19-month old Remy.

Watch Kelly Clarkson’s Carpool Karaoke segment in full below. Fast forward to the 6-minute mark to see her surprise date.