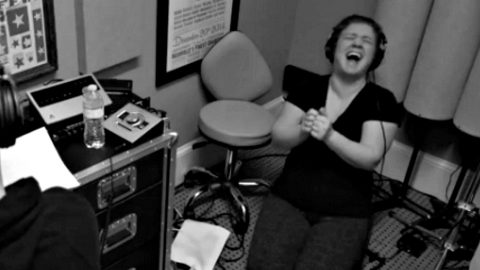 There are many things we love about Kelly Clarkson. Her incredible sense of humor and total realness are just two of them.

Clarkson showed off both of those traits in a hilarious video posted to social media while she was recording for her latest album. The video shows Clarkson in the studio and as the American Idol champion goes to hit a high note, her voice doesn’t quite cooperate. A surprised and humored Clarkson turns to the camera with a smirk and says, “Just loop that…just loop it.”

When the singer turns back toward the microphone to get back to business, the engineer replays the mishap causing Clarkson to fall to the floor in a fit of laughter.

“That should be your ringtone,” the engineer suggests to the three-time Grammy winner.

Kelly replied, “Oh my god, you’ve gotta send that to Seth. Just that part. Like, ‘How’s your day going?'”

Clarkson’s latest album, Meaning of Life, released in October 2017 and is”…my favorite album I’ve ever been a part of,” Clarkson said.

“It’s literally the record I’ve been wanting to make since I was a kid. And it encompasses all the things that I love – soulful R&B, urban, and pop – it’s a fusion of all that.”

In addition to celebrating the success of her latest album, Clarkson is also gearing up for her second run as coach on NBC’s The Voice. Clarkson won her debut season by leading team member Brynn Cartelli to victory, as well as her second season with Chevel Shepherd.

….that time you think, damn, I'm about to nail this ….and then you don't 😂😭 #inthestudio #whatthehellwasthat 😳