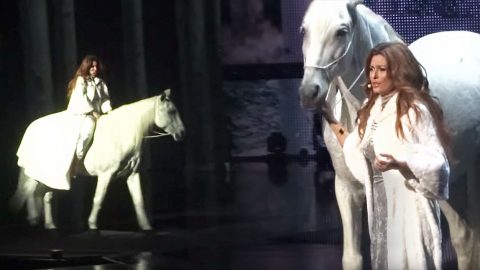 Country music star Shania Twain brought a fairy tale to life when she casually strolled out on her concert stage in a flowing cape atop a massive white horse! Fans were thrilled when the country beauty made her way across the venue, proudly showcasing her beautiful white horse.

Shania Twain during the opening ceremony, her horse was stunning… pic.twitter.com/9zcbsj3q4P

Twain showed her noble steed’s incredible tricks, commanding him to bow down towards the audience multiple times before gracefully dismounting from the animal and beginning an angelic performance of “You’re Still The One.”

No you're spending Friday night watching Shania Twain singing a love song to a horse… pic.twitter.com/htAWkAvpen

The audience roared with applause as the horse obediently followed the singer, displaying their admirable bond and this country gal’s love of all things southern!

“You’re Still The One” was written and released by Twain in 1998 as the third single off her Come on Over album. The single peaked at No. 2 and became her first top ten hit on Billboard’s all-genre Hot 100.

Watch it all go down in the video below!