Kid Rock Does Unthinkable In Front Of Golf Legend 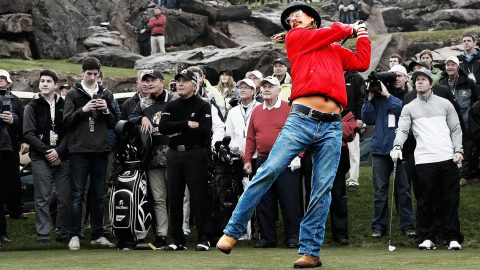 We all know him for his country music, but get this self-proclaimed “crappy golfer” on a professional course and an audience – and he will drop jaws.

Kid Rock, who recently finished up one stadium tour and announced another, has been one of the most notable Southern rock figures to hit the stage in decades.

He’s been known for many different parts of his life, was once married to Pamela Anderson, stirred up a whirlwind after hinting he might run for Senate, and is best-known for his holds-nothing-back music.

A Return To The Green

“Excited to be headed back to Big Cedar Lodge,” he said on Instagram. “And defend my and Jack Nicklaus’ title! (Yes that is still very surreal to me as a crappy golfer!)”

Excited to be headed back to Big Cedar Lodge / Top of The Rock to tee it up for "The Legends of Golf Shootout" and defend my and Jack Nicklaus’ title! (Yes that is still very surreal to me as a crappy golfer!) Thank you to Bass Pro Shops, and Johnny and John Paul Morris for having me again. One of my favorite spots to visit in the world! If you have not been, you should put it on your bucket list! Kid Rock

Beyond just heading back to the event to defend his title, he also showed off some unexpected skills that left Nicklaus with his jaw on the floor and a smile on his face!

What He Did That Shocked Everyone

On one hole, this 47-year-old multi-talented musician lined up to sink a ball on a 40-foot stretch of putting green that had a lot of folks doubting he’d make it.

As Nicklaus watched from behind, he took the stroke and tapped the ball sending it arching out to the left…but it quickly curved back and slowly rolled into the cup!

The crowd erupted in soft clapping and Nicklaus high-fived Kid Rock for his hugely-impressive golf game. They ultimately lost to Larry the Cable Guy, but this definitely was a win in their book!

Watch the full video below and let us know how you think he did!