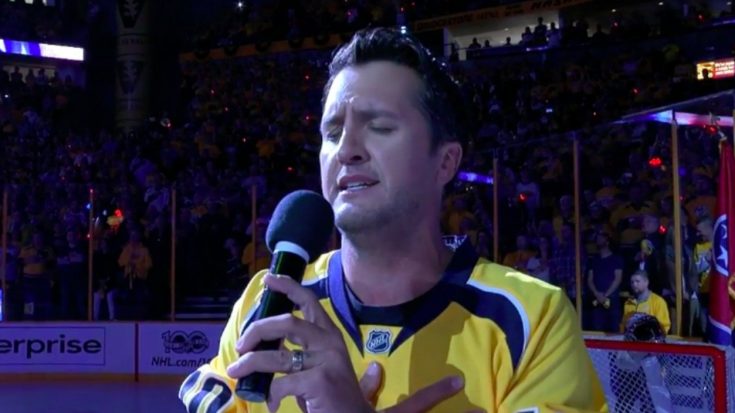 The Nashville Predators have some major celebrity support as they pursue the coveted Stanley Cup trophy. The NHL team has country superstar Carrie Underwood‘s husband, Mike Fisher, as a team captain so it’s no surprise that the Grammy Award winning singer often makes appearances to cheer her husband on.

But, it was a surprise when Underwood made her way to the ice prior to the Preds third game against the Chicago Blackhawks where she performed a rousing rendition of “The Star Spangled Banner.” The American Idol champ’s surprise performance was good luck for the Preds as they went on to beat the Blackhawks taking a 3-0 lead in the series.

Underwood was expected to perform the National Anthem again prior to Thursday night’s Game 4. So fans were shocked when country mega star Luke Bryan made his way out of the tunnel to sing the Anthem.

Bryan was well-rehearsed for the a cappella performance as it came just a few months after he kicked off Super Bowl LI with the same song.

Watch Luke Bryan’s stunning delivery of “The Star Spangled Banner” in the video below.