Miranda Lambert Spills Secrets In First Interview In Over A Year 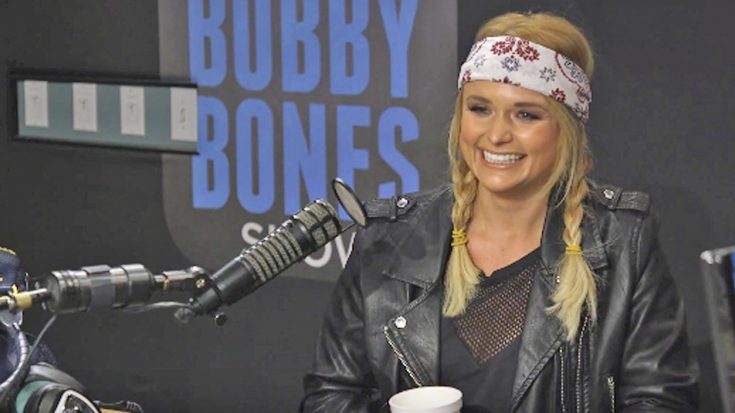 For the first time in over a year, Miranda Lambert sat down for an interview.

In the almost 10-minute interview, she and country radio host Bobby Bones covered a lot of ground. From her changing her song at the ACMs at the last minute, to the fake names she uses, Bones asked her all the hard hitting questions and got Lambert to spill lots of secrets about a lot of different things!

At the ACM Awards at the beginning of April, “Forever Country” won the award for Video of the Year, meaning all 30 singers that appeared in the video were able to come to the stage as the director of the video accepted the award.

Lambert was in the back of the big group of singers and ended up standing next to Faith Hill.

“Every time I’m around Faith Hill, I turn into a complete idiot. I don’t know why, but she’s so pretty,” she tells Bones.

It’s crazy to think that a person as famous as Miranda Lambert would get starstruck! Because of her fame, Bones asked her if she uses an alias at Starbucks or when checking into hotels. She revealed that her inspiration for her fake name is a dinosaur.

“I use Tara,” she said. “Tara Dactyl,” using a play on words in reference to the flying dinosaur, pterodactyl.

Although she says she rarely stays in hotels because she prefers to sleep on her bus if she has it with her. This prompted Bones to ask if she’s ever been through any scary bus incidents.

“We’ve had a few…one time our trailer passed us and flipped and it was terrifying,” she recalled. “It flipped in the fast lane. I had just gotten a guitar signed by Merle Haggard and that was the only thing in the trailer that got ruined. There’s a hole straight through where he signed. I was fine to do my ‘Kerosene’ video, so this was a long, long time ago, but it was scary for sure.”

She also revealed that she relies on a tipping application on her phone to do math for her when she needs to pay a bill at a restaurant.

They covered a lot of ground in the 9 minute clip and we loved seeing Lambert being silly. She looks incredibly happy. Watch the full interview below.