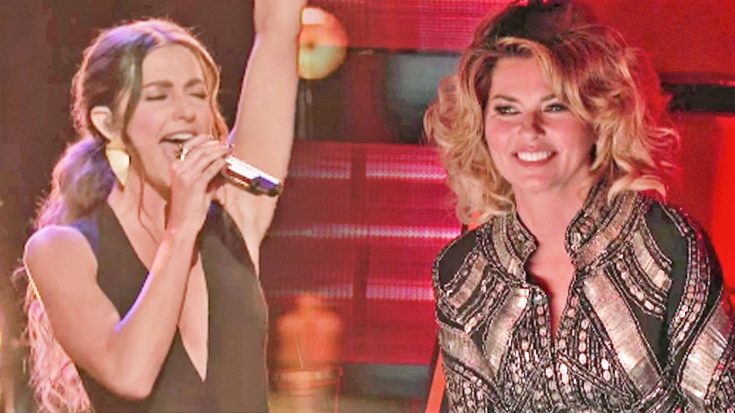 The Top 12 singers on Season 12 of The Voice were surprised to walk into their rehearsals this past week to see country superstar Shania Twain sitting next to their respective coaches.

Twain gave her best critiques to help each contestant put on the best performance possible, and one coach even assigned a song to one of his singers that was a little familiar to the guest mentor.

Adam Levine, coach to Lilli Passero, Mark Isaiah, and Jesse Larson, gave Passero Twain’s hit song “Man! I Feel Like A Woman”, which is a tall order to sing, without even adding the pressure of performing it in front of its original singer.

For the first time ever, The Voice installed a fifth coaching chair for Twain to witness the live shows, and the camera panned to her during Passero’s performance.

Although Passero was feeling a little under the weather and wasn’t actually able to rehearse the song in front of Twain, or even Levine, she came out of the gates nailing every sassy part of the song. She commanded the stage with so much confidence, we couldn’t even tell that she had never had a full run through of the song!

What did you think of her performance? Watch it below.